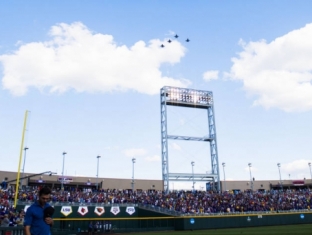 Oh my, what a College World Series it was. For fans viewing the games in-person or on TV, it was a banner year.

Sure, home runs were flying out of TD Ameritrade Park, setting records, but the real kicker was the number of fans who attended the games in Omaha, Nebraska.

As a matter of fact, 2017 marked the year with the highest single-season attendance mark in the 70-plus year history of the College World Series, according to data first reported by The Associated Press. The 357,646 fans who turned out for the 16 games at TD Ameritrade this year, bested the 2015 total of 353,378 guests.

The 2017 #CWS is now the most attended CWS in the history of the event… Thank you, fans! pic.twitter.com/CNKEIbLgUS