Indiana won its first NCAA national championship in 1940, becoming the first team from the East Regional to win the tournament. The Hoosiers beat Kansas 60-42 for the title game, led by 12 points from Most Outstanding Player Marvin Huffman. This was the first of three consecutive years Kansas City’s Municipal Auditorium would host the championship game.

Duquesne and Southern California also participated in the national semifinals in 1940.

Kansas’ Howard Engleman was the tournament’s leading scorer with 39 points. 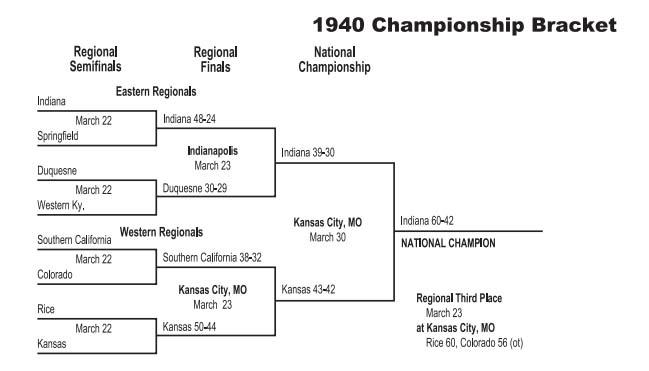 Here are the 1940 NCAA tournament leaders (number of games in parentheses):

Here’s a look into the 1953 NCAA tournament, including the bracket and scores.

Here’s a look at the 1954 NCAA tournament, which was won by La Salle. Get the bracket, scores and more here.

College basketball’s 13 most prolific scorers of the modern era

Here are the most prolific scorers in the modern era of college basketball.