13 things to know about Rutgers basketball

Scarlet Knight Fever rages in Piscataway, N.J., and why not, after Tuesday’s 72-61 win over ranked Penn State? They haven’t seen things like this — namely a 12-3 start, and serious, legitimate thoughts about an NCAA tournament bid — in this century. “We’re climbing the ladder,” coach Steve Pikiell said the other day. “We were picked to finish 12th in the league.”

Let’s start right there, with 13 things to know about Rutgers.

“I think we’re finding our way. I think we’re counting on our defense,” Pikiell said. Included in his team’s handwork this season:

Thrashing Niagara 86-39 — Rutgers’ biggest win over a Division I opponent since 1978 . . . holding Stephen F. Austin — the team that brought down Duke —31.5 points below its average . . . crunching Wisconsin with a 23-5 edge in second-chance points . . . whipping Seton Hall (Pirates star Myles Powell was injured) by 20 . . . blitzing Lafayette with a 17-0 start, which meant the Scarlet Knights opened three consecutive games with a combined run of 40-0 . . . blowing away Nebraska 79-62 with a 48-31 rebounding margin and 52 points in the paint.

So do we beat the Rutgers drum for March yet? Pikiell offers all manners of caution.

“We have 16 games left. We were picked 12th in the league. I get that stuff. It’s good to write about, I hope our guys aren’t reading it.”

“There’s a lot of season left, but I do appreciate the excitement and enthusiasm people have.”

“We’ve got to play well, we’ve got to beat really good teams with great coaches, we’ve got to go on the road and win. You’ve got to do a lot of things before you can start talking about anything else.”

Good luck on stopping that talk around Piscataway. It’s been a while.

Mike Lopresti is a member of the US Basketball Writers Hall of Fame, Ball State journalism Hall of Fame and Indiana Sportswriters and Sportscasters Hall of Fame. He has covered college basketball for 43 years, including 39 Final Fours. He is so old he covered Bob Knight when he had dark hair and basketball shorts were actually short.
The views on this page do not necessarily reflect the views of the NCAA or its member institutions.

Let’s break down what the Olympic redshirt situation means for these athletes, and how redshirts will impact the 2020 NCAA tournament in Minneapolis this March.

Here’s what you need to know about the nine freshman athletes ranked in the top 10 of the Intermat rankings, and how they might fare in their NCAA tournament debut. 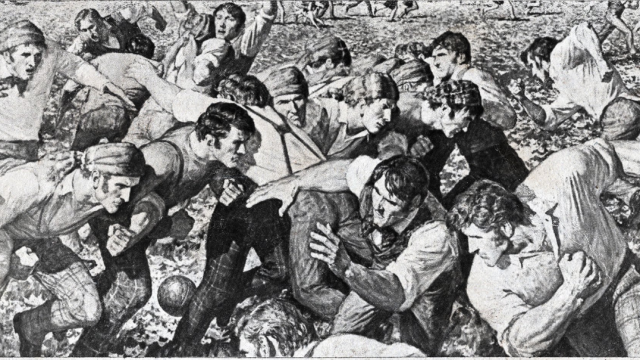 1st college football game ever was New Jersey vs. Rutgers in 1869

On this day 150 years ago, New Jersey (now Princeton) and Rutgers faced off in what is considered to be the first American football game ever played.