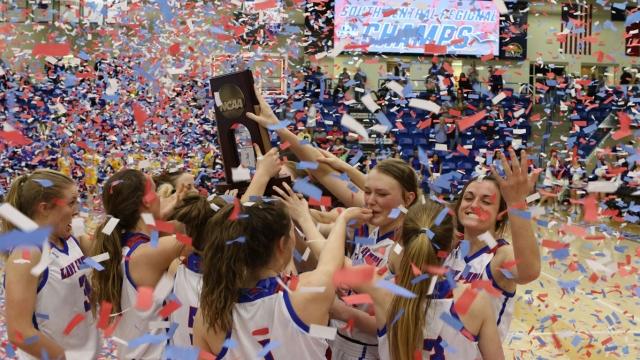 Lubbock Christian women’s basketball extended its home winning streak to 87 games with a 72-48 win over UTPB on Sunday. The Chaparrals have now tied the DII record for the most consecutive home victories, which was set by Nebraska-Kearney on Nov. 23, 2001.

Here are 12 superlatives from the program’s historic run at home.

Six players scored in double figures for the Chaps, who handled the Rams, 101-72, in the second round of the South Central regional tournament. On a day where Nicole Hampton became the program’s all-time leader in assists, she posted a 12-point, 12-assist double-double.

The Chaparrals held off the Buffaloes, 56-53, in the championship game of the South Central regional. Lubbock Christian forward Tess Bruffey recorded just the fourth triple-double in program history. She finished with 17 points, 13 rebounds and 10 assists as the Chaps punched their ticket to the Elite Eight.

Lubbock Christian outlasted St. Edward’s, 84-80, in overtime of the regular season’s final game. The Chaps trailed by as many as 10 in the third quarter, but were able to stem the tide behind Bruffey’s 30 points on 10-of-14 shooting.

Not only were Texas A&M International’s 19 points the fewest allowed by the Chaps during this streak, they were the fewest allowed in program history. The Dustdevils made just six of their 48 field-goal attempts, and failed to score a single point in the third quarter. Lubbock Christian won 88-19.

This game was also the Chaparrals’ largest margin of victory, as they won by 69 points.

The Chaps needed all of Maddi Chitsey’s 17 points to defeat Angelo State, 61-59, in the semifinals of the South Central regional tournament. There were seven lead changes in the game.

Tess Bruffey’s name is a constant among these superlatives, and she’s responsible for the two highest-scoring games during Lubbock Christian’s streak. The 6-4 forward dropped 30 points on 9-of-23 shooting in the Chaps’ 60-55 win over Newman on Feb. 16, 2017. She did it again nine days later in the 84-80 overtime victory against St. Edward’s on Senior Day.

Lubbock Christian shot 62.1 percent (18-of-29) from beyond the arc in its 100-60 win over Oklahoma Panhandle. Nine Chaparrals made at least one 3-pointer. Sisters Tess and Claire Bruffey each hit three. Those 18 triples were the most for a singe game in program history.

Ten players came away with at least one steal in the Chaps’ 96-51 triumph over the Aggies. Haley Fowler and Kelsey Hoppel each led the team with three apiece. While the 18 steals were not a school record, they were a season-high.

Less than a month ago, Lubbock Christian scored 40 points off 29 turnovers in an 85-42 victory against Texas A&M International. Seven Chaparrals came away with at least one steal, while five players grabbed two. Allie Schulte finished with four steals and Whitney Cox had three blocks.

Lubbock Christian scored 50 points in the paint on three separate occasions during the 2015-16 season — all in the span of three weeks. The first occurrence came in a 96-51 win over Oklahoma Panhandle on Dec. 31, 2015.

Led by Clair Bruffey’s game-high 22 points, the Chaps bench dropped 51 on Texas A&M International in Lubbock Christian’s 84-49 victory. Bruffey shot 7-of-12 from beyond the arc while adding six rebounds in just 22 minutes of play.