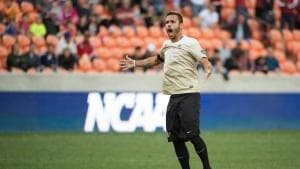 
Maryland lost seven players from its national title-winning squad. Andrew Gutman’s illustrious Indiana career came to an end so someone else will take home the MAC Hermann Trophy.

Those are two big reasons the 2019 men’s soccer season will pave the way for the next wave of players to step into the spotlight. While much of the United Soccer Coaches preseason poll looked like the one at the end of the 2018 season, the forces driving some of the top programs are no longer around. Here are 11 players from that Top 25 to keep an eye on this season:

An integral part of Stanford’s back line, the two-way defender was named the 2018 Pac-12 player of the year and a United Soccer Coaches first team All-American, recording 21 points.

Beason guided the Cardinal to the College Cup quarterfinal a season ago but will look to lift the trophy for a third time. Named to the College Cup All-Tournament team in 2016 and 2017, he was part of a defense that did not concede goals in either postseason.

One of six returning semifinalists for the MAC Hermann Trophy, Beason will look to bring home the hardware to cap his time in Palo Alto.

The spotlight will be focused on Bergmann in 2019 following the departures of Donovan Pines and Dayne St. Clair.

At 24 years old, he’s one of the more seasoned players across Division I. During Maryland’s run to the national championship, Bergmann started every match and played the second-most minutes on the team.

A tactical defender, his offensive presence could potentially increase next season as Bergmann will resume his duties as the Terrapins’ left-footed free-kick specialist.

One of the biggest surprises in 2018, Egbo broke out for 13 goals (6 game-winners) as a sophomore after recording just six total points as a freshman.

On the back of its top striker, Akron returned to the College Cup Final for the first time since 2010. Egbo notched eight points in six NCAA Tournament matches, including an assist on the lone goal in an upset of No. 1 seed Wake Forest.

A third team All-America selection by United Soccer Coaches, he returns to the Zips to try and finish the job.

ElMedkhar took over a starting midfield spot in 2018 and the payoff was tremendous for Kentucky. The sophomore netted 11 goals and dished out 10 assists while forming a strong offensive tandem with JJ Williams.

Behind ElMedkhar and Williams, the Wildcats earned the No. 3 overall seed in the NCAA tournament, reaching the quarterfinals before falling to Maryland.

Williams and his 18 goals (third-most in Division I) will be difficult to replace, shifting the focus towards ElMedkhar to become the primary source of attack.

In Ferriol’s first season as a full-time starter, he led James Madison in scoring. Of his career-high nine goals, three came during the NCAA tournament, including one in a second-round upset of North Carolina.

Tied for the team-lead in assists (5), Ferriol was part of a balanced attack that propelled the unseeded Dukes to the quarterfinals, the program’s best postseason finish since 1995.

Jennings returns to UCF after a breakout year that saw him score 20 goals in 2018 after managing eight in his first two seasons.

A United Soccer Coaches first-team All-American, Jennings carried the Knights offensively with six game-winning goals in the team’s 13 wins. UCF received a top-16 seed in the NCAA tournament, bowing out to Lipscomb in the second round.

LOOK:  Jennings among top returning scorers in Division I

A new fixture into the Wake Forest starting lineup, in 2018, Lapa broke out in a big way. His 29 points ranked second on the Demon Deacons as the first-time starter won ACC midfielder of the year.

Lapa earned first-team All-American honors from United Soccer Coaches and made the preseason watchlist for the MAC Hermann Trophy.

After sharing a back line with Andrew Gutman for a season, Maher is set to take on lead defensive responsibilities in Bloomington.

Part of a unit that allowed 13 goals in 2018, Maher was awarded Big Ten freshman of the year and is the sole sophomore on the MAC Hermann watch list.

Jack is the only current college player invited to the camp, joining 22 professionals!

Montesdeoca offered glimpses of his offensive prowess as a redshirt freshman. Given the opportunity to start as a sophomore, he led the Tar Heels in scoring with eight goals and 20 points.

Behind Montesdeoca, North Carolina earned the No. 5 overall seed in the NCAA tournament after winning 14 matches and reaching the ACC tournament final.

The lone netminder on this list, Prieur is coming off a historic season with Saint Mary’s.

As a junior, he recorded 14 shutouts and 18 wins, leading the Gaels to their second conference title in program history. Prieur shutout Oregon State in the NCAA tournament before and kept Stanford scoreless through regulation and extra time.

Prieur was named a United Soccer Coaches third-team All American and one of two keepers on the preseason MAC Hermann Trophy watch list.

Proch increased his goal tally by more than double as a junior, netting 11 goals (five game-winners). He returns to Durham as one of six MAC Hermann Trophy semifinalists from 2018.

A United Soccer Coaches second-team All American, Proch led Duke to a national seed in the NCAA tournament. The Italian midfielder will likely be the centerpiece of the Blue Devils’ offense.