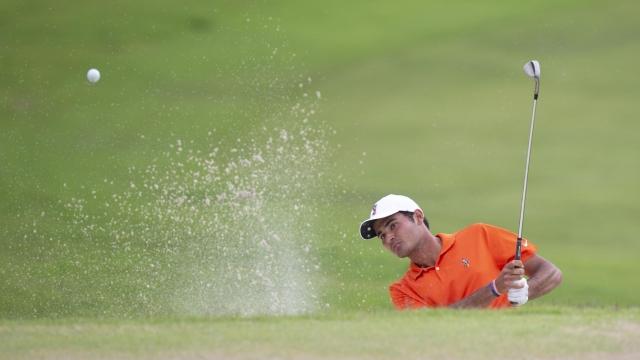 The Fred Haskins Commission announced today the final watch list for the 2021 Fred Haskins Award presented by Stifel, recognizing the most outstanding NCAA male Division I collegiate golfer for the 2020-21 season as voted on by his fellow players, coaches and the college golf media.

Eleven players were selected for the final Haskins Award watch list based on their performances in the 2020-21 college golf season. Ten of the 11 players will be competing in the NCAA Division I Men’s Golf Championships, taking place May 28-June 2 at Grayhawk Golf Club in Scottsdale, Ariz.

Stifel Financial Corp (NYSE:SF) also announced that it has signed a multi-year extension as the presenting sponsor for the Haskins and ANNIKA Awards, along with GOLF Channel’s coverage of the NCAA Division I Women’s and Men’s Golf Championships, further strengthening its commitment to college golf.

“Stifel has been a proud supporter of college golf through our association with the Haskins Award for more than a decade, and our commitment to the sport has grown stronger with each passing year,” said Ron Kruszewski, Chairman and CEO of Stifel. “We are honored to continue our partnership with the Haskins and ANNIKA Awards and are excited to showcase the future stars of the game once again through GOLF Channel’s coverage of the NCAA Golf Championships. These student-athletes have gracefully handled the challenges of this unconventional season, and we salute them for their remarkable resiliency.”

Voting for the 2021 Haskins Award is now open at www.haskinsaward.com and will close on Monday, May 31, one hour following the completion of stroke play at the NCAA Men’s Golf Championships. The final three finalists will be recognized by GOLF Channel on Tuesday, June 1 and the recipient will be announced. Current NCAA D1 men’s golfers, men’s coaches, men’s golf sports information directors (SID’s) and college golf media only are eligible to vote. Voting for the Haskins Award presented by Stifel will be compiled and verified by the Haskins Commission, which oversees the award.

Past winners of the Haskins Award have captured 31 major championships and more than 400 professional tournament victories around the world. Past recipients include Tiger Woods, Phil Mickelson, Ben Crenshaw and Justin Thomas. Pepperdine’s Sahith Theegala was the recipient of the 2020 Haskins Award. GOLF Channel and Golfweek are media partners for the Haskins Award presented by Stifel.

About the Fred Haskins Award presented by Stifel

Celebrating its 50th year, the Fred Haskins Award presented by Stifel is given annually to the top male U.S. collegiate golfer and is the oldest individual college golf award and the only award to be voted on by players, coaches, golf SID’s and the college golf media. Named after legendary golf instructor Fred Haskins, the Haskins Award has been given to players who have captured 31 major championships and more than 400 professional tournament victories around the world. Past recipients include Tiger Woods, Phil Mickelson, Ben Crenshaw and Justin Thomas. Sahith Theegala (Pepperdine) won the 50th Haskins Award in 2020. More information about the Haskins Award presented by Stifel is available at www.haskinsaward.com.

About Fred Haskins and the Haskins Commission

From the seaside town of Liverpool to a quaint Donald Ross course in Georgia, Fred Haskins built a reputation for mentoring young golfers. Haskins was head professional at the Country Club of Columbus for 34 years, recommended for the position by the legendary Bobby Jones. His proteges learned the game in Saturday morning classes that cost a nickel. They went on to win more than 150 collegiate and amateur tournaments. Haskins, a master club-maker as well, died in 1981. Since its formation in 1971, the Haskins Commission has been devoted to amateur golf and the presentation of the Haskins Award. This coveted trophy honors the year’s outstanding college golfer and the memory of Fred Haskins, an obscure club pro that spent his life nurturing and mentoring amateur golfers. The commission, based in Columbus, Ga., oversees the voting conducted among college golfers, coaches and golf media.