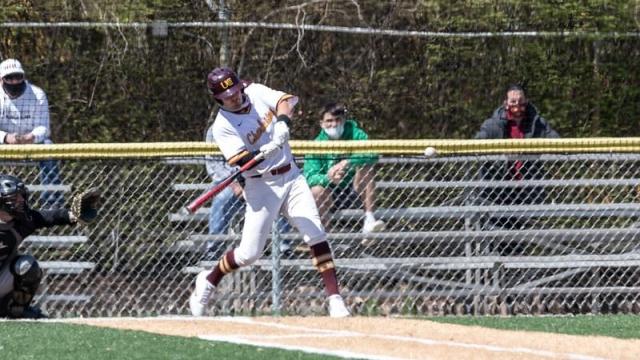 There are just a few weeks left in the DII baseball season. Before conference tournaments begin, let’s take a look at some teams to keep your eyes on as we get closer to selections.

Each and every Sunday, we release our DII Power 10 rankings, where we not only provide you the top teams at that moment but 10 or so more teams that just missed. We know the top 20 teams by now, but the DII baseball tournament has well more than 20 teams.

So, these are 11 that we haven’t discussed much at all, but should very much be on your radar this May.

Charleston (WV)
We finally mentioned the Golden Eagles as “in the conversation” in last week’s Power 10. Simply put, we are really in awe at just how good this team is. They also earned the first national ranking in program history, so we are looking at a special season.

The Golden Eagles are 24-4 and have yet to lose a weekend series this year. The pitching has been sensational, its combined 2.97 ERA among the best in all of DII. Starters Colt Webb and Logan Campbell are a combined 11-0 with a 2.36 ERA and WHIP under 1.00. But they are well rounded, hitting a combined .348 at the plate which is also top 10 in DII baseball. This is going to be quite the finish for Charleston.

Shorter
Looking at Shorter’s last five full seasons (excluding 2020 when play stopped), the Hawks had one winning season when they finished 22-21 in 2019. They never had more than 23 wins over that span. So, the fact that Shorter is 22-11 and ranked in the top 25, well, let’s say the word impressive is an understatement.

The Hawks pitching staff has a top-15 ERA in DII baseball, led by Jonathan Pintaro. The righty currently has an 8-2 record with a 2.50 ERA behind a minuscule 0.89 WHIP and a whopping 114 strikeouts in 72 innings. It is important to remember that Shorter is in the Gulf South Conference, a battle-tested baseball division with plenty of talent week in and week out. The Hawks have signature series wins over Lee and West Florida, two teams that have been mentioned in our Power 10 rankings every week.

Millersville
The Marauders were in our preseason top 25, but sitting at 16-8, we simply haven’t discussed them too much lately. You would be very foolish to sleep on a Jon Shehan team in its worst year, and this is a far cry from that.

Millersville hit a speed bump a couple of weeks ago, losing three in a row. It has quickly righted the ship, going 7-2 — including a big series win over West Chester — and finds itself back atop the East Division of the PSAC. The lineup is full of experienced bats and Bren Taylor, Tyler Wright, Luke Trainer and Cole Friese are all hitting above .325 for a team hitting .327 overall. The pitching will have to dig deep, but Shehan always seems to get the most out of his arms when things heat up in the northeast.

TOP GUNS: 9 pitchers you should watch down the stretch

Florida Southern
The Mocs earn their spot here behind the most DII baseball titles of all time and that should always have them on watch. Florida Southern is trending in the right direction, winners of its last three, but the remaining schedule is an absolute nightmare: three games against Barry, three more against a surging Nova Southeastern and six left against the defending champion Tampa Spartans. That said, if the Mocs come out ahead, we’re looking at a contender.

Jacob Teeter is one of the best in the land, and we’re talking on a national stage after earning an All-Star nod in the Cape Cod Baseball League in 2019. Despite having his 11-game hitting streak snapped the last time out, he has certainly delivered thus far, hitting .362 with eight of his 17 hits going for extra bases. For Florida Southern to survive the next few weeks, the starting pitching — which has struggled to date — will have to step up. But like we said, if the Mocs can make some noise against that remaining slate, you best be watching.

Oklahoma Christian
On March 21, the Eagles fell 11-5 to West Texas A&M as the Buffs completed a four-game sweep that knocked Oklahoma Christian to the bottom half of the Lone Star Conference.

The Eagles are 13-1 since, including a three-game sweep of nationally ranked UT Tyler this past weekend. The pitching isn’t superb, their 6.60 ERA near the bottom of the Lone Star, but the hitting simply outlasts its opponents. As a team they are hitting .319 with a Lone Star-best 55 home runs and .541 slugging percentage. Michael DiFlore is the leading raker with 12 home runs and Blake Empkey is hitting .366 with nine home runs and 10 doubles of his own.

Le Moyne
The Dolphins are rolling, now 8-2 overall. They have had the luxury of opening the season primarily at home where they are 7-1, so we will see how road-tested they are in the next few weeks.

Now, Le Moyne has played a mere 10 games, so statistics are in the small-sample-size window. That said, the pitching has been great. Through three starts, Joe Vail has a 0.50 ERA behind a 0.72 WHIP and 28 strikeouts in 18 innings. You can also add a no-no to his ’21 resume when he fired a no-hitter against Saint Rose earlier this season. It will be interesting to see what they can do at the plate, but Drew Carroll has come out hot, hitting .414 with a team-high 12 RBI and a perfect 6-for-6 on the base paths.

Columbus State
The Cougars are a perennial contender for the tournament and despite a slow start — at least by their standards — they are rolling once again. Columbus State is 8-2 over their last ten, with a big series against UNC Pembroke looming in a couple of weeks.

We feature Robert Brooks earlier this season as a hitter to watch and he’s yet to relent. The backstop is hitting .353 and third in DII with 15 home runs and a team-high 38 RBIs. The lineup has been steady all season, so the question will be if the pitching can throw it altogether down the stretch. They certainly have the talent, and coaching, to do so.

Molloy
The Lions have won nine in a row, and are heading to a huge showdown with St. Thomas Aquinas this weekend. The Spartans are always in the mix in the postseason, so this is a big test and will be a statement should Molloy win the series.

The Lions are a team — like many in the northeast — that don’t rely on the long ball and manufacture their runs. They have a mere four home runs through 17 games, but are hitting .346 as a team with 45 stolen bases to average 10.8 runs a game. Timothy Panetta leads the way on the bump, pitching to a 2.48 ERA and 0.86 WHIP. While the Lions could use a little more out of their pitching, they seem to be poised to make some noise down the stretch.

MSU Denver
Yeah, yeah, yeah. I am aware they went into Grand Junction, Co. and didn’t fare well against Colorado Mesa. But let’s be real… no one has. Outside of that four-game blip, the Roadrunners are 25-3 on the season. While I understand you can’t ignore the series sweep to the Mavericks, this is a really good baseball team regardless.

First, in a conference where the air is thin, how about a shoutout to Cade Crader? The senior righty, who is now 5-1 on the season, tossed the first perfect game in RMAC DII baseball history back on March 27, putting up his fourth double-digit strikeout performance of the season in the outing. But that’s enough about pitching, this is the RMAC and we want juicy offensive stats, right? The Roadrunners certainly bring the lumber, hitting .341 as a team with a combined 1.050 OPS and 61 home runs, fourth-most in DII. Every regular starter is hitting over .325, but Bill Ralston, Chase Anderson and Jake Williams are three to watch. Ralston and Anderson are hitting over .400 while Williams leads the team with 11 home runs.

Quincy
The Hawks were my top sleeper heading into the season, and look out: here they come. Quincy has won 13 in a row and we cannot wait until the season-ending series against Illinois Springfield.

We’ve discussed Riley Martin in depth as one of our pitchers to watch and he just keeps striking out hitters and winning ball games. He’s struck out at least 11 in six of his seven starts this season. What I don’t think we’ve talked about enough is the offense. As a team, Quincy is hitting .349 with a 1.027 OPS. The Hawks are second in the GLVC in runs score with 262, home runs with 43 and RBIs with 240. All of the regular mainstays in the lineup are hitting over .300. This team is clicking and you should be watching.

Wayne State (MI)
The Warriors were yet another sleeper in our preseason top 25, but it was hard to figure them out earlier in the season. They played a lot of NAIA and DIII competition and dealt with a flurry of postponements. But now, the Warriors are rolling, winners of five in a row. The GLIAC is wide open, and Wayne State is 8-2 in their last 10, so you can argue the Warriors have the current edge.