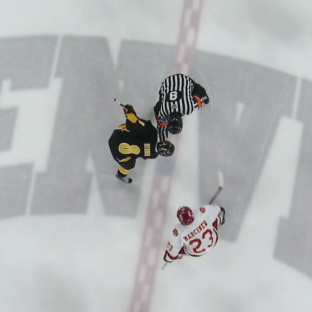 Rivalries bring out some of the most exciting, intense and (sometimes) heartbreaking moments in college sports.

Duke-North Carolina in basketball. Auburn-Alabama in football. Countless others — from the Apple Cup in Washington to the Crosstown Shootout in Cincinnati, from the Little Brown Jug in the North to any number of Lone Star Showdowns — help make college athletics what they are.

But rivalries, and the history and traditions that accompany them, go beyond these well-known showdowns. Here are 11 college sports rivalries you may not know about.

Pick a side. Wisely.

Known as the Blue-Green rivalry, this battle between UC Santa Barbara and Cal Poly was established in the fall of 2012. UCSB and Cal Poly first met on the football field in 1921 and became rivals years later when both became members of the California Collegiate Athletic Association. The schools, located about 100 miles from each other along the central coast of California, battle it out each year in various sports. They’re even hoping to have a trophy in the future, but, for now, bragging rights will have to do. The winner of every regular season match in head-to-head competition receives a point for the school, with the most points resulting in the official winner. One of the most popular events for this rivalry is in men’s soccer, when fans pack the stands to watch the Mustangs and Gauchos duel.

You know the saying, “keep your friends close and your enemies closer.” Well, it certainly applies to this rivalry. The football programs literally play next door to each other. From NCAA.com’s Mike Lopresti:

“A rivalry game, anything can happen. The favorite doesn’t usually win that game,” Henderson’s coach Scott Maxfield said of the Ouachita Baptist series. “We’ve had some really close games across the street.”

And he means literally across the street. If the wind is right, you can hit a golf ball from the end zone of Henderson State’s Carpenter-Haygood Stadium to the end zone of Ouachita Baptist’s Cliff Harris Stadium with a driver and 3-iron. The Reddies golf coach has done it. It’s a five-minute walk for Henderson State’s players to that away game, with state police stopping traffic on two-lane U.S. 67, so they can cross. The rivalry drew 12,228 in 2014 in Henderson State’s stadium, which was 1,500 more than every man, woman, child and football fan in Arkadelphia, Ark.”

In the rivalry, also knowns of the Battle of the Ravine, Henderson State holds the lead at 43-41-6. The rivalry is also the oldest in DII football.

Named simply “The Rivalry,” this football matchup is the longest-running rivalry in the nation. These two teams have met each year since 1884, with the exception of 1896. The two schools are located only 17 miles apart in eastern Pennsylvania. Back in 2014, they played the much-anticipated rivalry game at Yankee Stadium. Lafayette leads the all-time series 78-69.

With their campuses only 65 miles apart, this hockey rivalry, also known as The Battle for the Gold Pan, began in 1950. That first Gold Pan trophy was a rusty old pan from Cripple Creek, Colorado that had actually been used for prospecting. That trophy was lost in Denver after the 2003–04 season. The current trophy was created by Colorado sculptor Mike Halterman and donated by the Cripple Creek & Victor Gold Mine in 2005. These two teams have squared off more than 300 times, playing each other four times in a single season. On Feb. 20, 2016, the teams played in their first outdoor match at Coors Field in Denver in front of more than 35,000 spectators.

These two rivals have met over 300 times, too, but last season marked the first meeting since 2014. When the Western Collegiate Hockey Association split up in the fall of 2013, it ended a run of 66 consecutive years of regular season meetings between the border rivals. Of course, the rivalry couldn’t die that easily, and the squads met in the 2014 Frozen Four when Minnesota won 2-1 (the Golden Gophers scored with 0.6 seconds left to earn a spot in the championship). Together, the rivals are impressive on the ice, combining for 13 national titles and 12 national championship appearances.

The success of these two top Pac-12 softball programs has created a much-anticipated rivalry over the years. To break it down: The Bruins have 12 titles and have made 27 Women’s College World Series appearances, while the Wildcats have eight national championships and 22 WCWS appearances. So yes, these two programs mean business when it comes to competition on the diamond.

In the world of college wrestling, this rivalry is known as “The Border War.” It began in 1975, and in 2009 finally got some hardware when a former Broncos wrestler crafted an axe out of wood to serve as the trophy. The teams have met 40 times, with Oregon State winning 32 of those battles.

This rivalry has been coined the “Battle of the Burgs” which is fitting for these two DIII wrestling powerhouses. Each year they meet for a huge battle. Just check out the championship history. They’ve combined for 25 titles.

This match is known as the Milwaukee Cup. The two schools are only 10 minutes apart and face off annually in men’s soccer. Beginning in 1973, Milwaukee leads the all-time series 28–11–5. However, there has been a draw five times, which results in the cup remaining in possession of the school who held it prior to the match. The rivalry games hold the record for the biggest crowds in the history of either program.

The men’s basketball rivalry between these two teams spans over 96 years and 196 games. Hope leads the series 101-95. In women’s basketball, Calvin leads 47-41. Both teams, located in Michigan, play at the DIII level. When it comes to basketball rivalries, this ranks with Duke-UNC and Kentucky-Louisville to many. An awesome website dedicated to the rivalry tracks the 80-plus places in the world where fans can celebrate the rivalry.

The “War on the Shore” is a lacrosse legend, contested between two schools 82 miles apart on the eastern shore of Maryland. These two DIII schools play each spring and is often the most anticipated game of the season. The trophy, the Charles B. Clark Cup, has been awarded to the winner since 2004, in the name of “The Biggest Little Lacrosse Game in America.”

Some others you may not know: