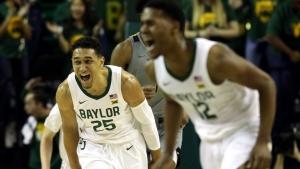 
Here on the first Monday of April, all is silent in college basketball. There are no nets to cut down, and no song of celebration for the new champions to share at the Final Four. So let’s imagine a very different kind of One Shining Moment.

It is November, 2020. Restaurants are open, streets are busy, people are working. The national conversation is about the imminent election, not tomorrow’s count of virus victims. Life might not be back to normal — life might not ever be back to that normal — but at least the world is now welcome outside, and you can get anything you want at the store. Even toilet paper.

And college basketball, which said a hurried goodbye in the confusion of that awful March, is ready to begin anew. The doors will be open, and everyone will be OK with that. The storylines will be, blessedly, back on the court. These for instance. . .

It likely won’t be the Kansas Jayhawks, who were at the top when the lights went out. We will never know if the combination of Devon Dotson and Udoka Azubuike was as championship-ready as it looked at the end of the season, but we do know Azubuike is gone and Dotson probably will be. Which should open up No. 1 for. . .Gonzaga.

Lest we forget, when last seen, Gonzaga was 31-2. It seemed like half the roster averaged in double figures and most will probably be back, including Filip Petrusev, who would be a national player of the year candidate. If prize freshman guard Jalen Suggs decides against pro ball overseas and shows up in Spokane, the Zags might be as good as they’ve ever been, and that’s a high bar.

Baylor loses Freddie Gillespie, but probably not much else, and should have a healthy Tristan Clark, who looked like an all-league player until he hurt his knee.

Nearly all the faces in Villanova’s late-season hot streak will probably return — maybe not Saddiq Bey, but possibly Justin Moore, Collin Gillespie, Jermaine Samuels and Jeremiah Robinson-Earl — while former-five star recruit Bryan Antoine should be recovered from shoulder surgery and Tulane transfer Caleb Daniels adds a 17-point scoring average. If all but Bey do return, the guess is the Wildcats will start at No. 1.

How about an intriguing new wannabe pushing for national glory?

Say hello to Creighton. Few teams were playing better at the end of the season than the Bluejays, who won 11 of their last 13 and ended up the top seed in the Big East tournament. It’s possible every key contributor will return. That means Ty-Shon Alexander, Marcus Zegarowski and Mitch Ballock, to fire away from the 3-point line in one of the nation’s most dynamic offenses. And Denzel Mahoney, among the most productive sixth men anywhere. And guard Davion Mintz, a two-year starter who missed last season with an ankle injury. If they all do come back, and Creighton finds a little muscle inside and plays some defense, it can stand with anyone. Omaha has packed the house for years with fervent crowds, what will it be like to have a genuine national championship contender in town?

P.S. Creighton last advanced as far as the Elite Eight in 1941.

Is North Carolina’s suffering over?

A 14-19 record looks more out of place in Chapel Hill than a Go Duke! sign. Roy Williams will run out of long faces if the Tar Heels do anything like that again, and freshman star Cole Anthony is likely headed for the NBA. But Williams has a vaunted recruiting class to make things better, and those who return have the pain of last season to drive them. Three years ago, North Carolina won a national championship with its redemption tour, motivated by a last-second loss in the title game the season before. What will they call this tour for the Tar Heels? Return to normalcy?

Instead of focusing on all the new Wildcat freshmen — rest assured, the usual gaggle of bluechippers is headed to the bluegrass — the spotlight might be on those who stuck around. Maybe Immanuel Quickly. Maybe Nick Richards. Since this is Kentucky, the answer to the N-B-A is almost always Y-E-S. But this time, maybe not. If they do return, Kentucky goes straight to the list of No. 1 candidates, too.

Depending upon how loud the NBA siren call is for the Blue Devils, Mike Krzyzewski might have nearly an entire lineup to replace. But he’d a need jumbo SUV to bring in all his renowned recruits. It’ll be intriguing to see how he starts putting the pieces together. It always is.

Will late-season surges from early-season struggles at some big-name places carry over to next season?

We’re looking at you UCLA, Texas and Wisconsin.

Is Iowa the team to beat in the Big Ten?

The Hawkeyes could well be if Luka Garza returns, since most everyone else will be back with him. And Jordan Bohannon, a big-shot maker, comes off an injury redshirt. True, Wisconsin was charging hard at the end and will return intact, and Michigan State is Michigan State, even if Xavier Tillman joins Cassius Winston out the door. But it’s always nice to know you’re starting off with the best player in the league. In case it comes up, the last time Iowa so much as shared a conference season title was 41 years ago.

Is Virginia still the defending champion?

Technically, yes, even if it that seems rather odd. Only Ryder Cup teams are supposed to be a defending champion for two years. Anyway, by the end of the season, the Cavaliers were warming to the task, winning their last eight. By the time the 2021 tournament arrives, Virginia’s championship night in Minneapolis will seem like a lifetime ago.

Is the party over at Dayton, San Diego State, Rutgers?

The argument could be made that nobody was hurt worse by the aborted 2020 NCAA Tournament than Dayton, with a once-in-a-generation team that had every chance to achieve the Final Four, and maybe even more. Obi Toppin’s dunks are now a beautiful memory. The Flyers aren’t going away — they’ve been a solid program for eons — but any resemblance to last season would be asking a lot. San Diego State’s chances to keep the good times going will largely be affected by Malachi Flynn’s decision to stay or go. Rutgers was all set to end a 29-year wait to get back to the NCAA Tournament. Most of the Scarlet Knights are eligible to come back and try again.

Should the AARP officially endorse the ACC?

Let’s hear it for the old coaches. The ACC will have five over the age of 70 when the season begins — Jim Boeheim at 75, Mike Krzyzewski 74, Leonard Hamilton 72, Jim Larranaga 71 and Roy Williams 70.

Is college basketball going to be . . . different?

It has to be. Because all of us will be different. The hope is that the worst is long behind us by then, and that we recognize our lives and our world again. And maybe we will have learned to value the experience more, while remembering that a blown official’s call or questionable coaching decision does not constitute a national crisis. We should know by now what a real crisis looks like.

Sooner or later sport – and college basketball — will play its part in the soothing of a battered national psyche. Just the chance to play, or even watch. . .that will be the biggest storyline of all in November. That moment seems pretty shining, here on the somber first Monday of April.