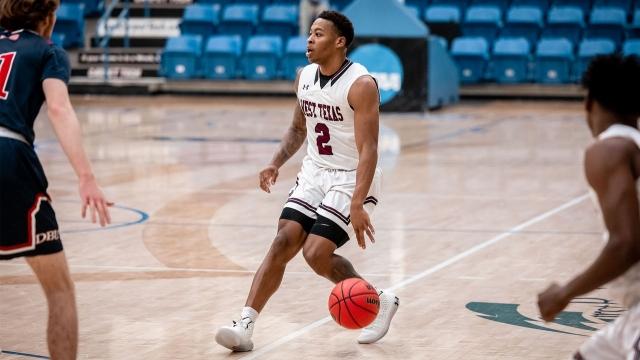 The 2021 DII Men’s Elite Eight is set to tip off from Evansville at 1 p.m. ET this Wednesday, March 24. You can stream the quarterfinals or follow the games right here on NCAA.com.

Before Lincoln Memorial and Colorado School of Mines tip off the Elite Eight action, let’s look at one thing you should know about each team remaining.

No. 1 West Texas A&M — This is the third-straight trip to the Elite Eight for the Buffs. They are 1-2 the previous two trips, losing to host Southern Indiana in a memorable 2019 opener. Simply put, it doesn’t feel like a DII Elite Eight without the Buffs, and they once again delivered.
Player to watch: Qua Grant — His wingman, Joel Murray, is leading the team in scoring, but Grant is coming off a career-high 40 points in the South Central final.

No. 2 Northwest Missouri State — The reigning champs are back for the third time in four seasons. The previous two trips? The Bearcats left with a national championship. Trevor Hudgins, Diego Bernard and Ryan Hawkins combined for 25 points in the 2019 championship game and return for another run. A quick reminder: Hudgins and Bernard were mere freshmen in that game.
Player to watch: Trevor Hudgins — The two-time MIAA player of the year is averaging 20.1 points on 54.5 percent shooting from the field, 52.5 percent from 3 and 89.2 percent from the free-throw line.

No. 3 Flagler —  Welcome to the Elite Eight. The Saints are 17-2 and on a 15-game winning streak. Why is that so impressive? Flagler hasn’t had a winning season since the 2007-08 season, with many of those years ending in single-digit wins. The Saints came out toppling two DI teams in a week and have yet to relent.
Player to watch: Jaizec Lottie — Lottie has flourished into a true DII superstar, averaging 24.7 points per game, while shooting a remarkable 41.7 percent from 3. He set the program record with 10 3s in the South Region championship game.

No. 4 Lincoln Memorial — Head coach Josh Schertz looks to wrap up a sensational 13-year career with the one thing that has eluded him: a national championship. He’ll have a squad that is top 5 in DII in quite a few categories, including scoring offense (5th with 92.8), margin of victory (1st with 22.8), rebound margin (5th with 8.8), assists per game (1st with 22.6), field-goal percentage (2nd at 52.7) at 3-point percentage (5th at 41.2). Yeah, this team is good.
Player to watch: Jordan Guest — We’ve spoken at length about Devin Whitfield and Cam Henry, but Guest is coming on strong and a real X-factor. He had a fantastic Southeast Region tournament, posting a double-double in the win over Tusculum before going off for a season-high 37 points in the clincher against Emmanuel (GA).

No. 5 Colorado School of Mines  — This is the second trip in program history for the Orediggers, reaching the Elite Eight back in 2017. The Orediggers have the top scoring defense remaining, allowing just 60.5 points per game. In our preview, we discussed how this sets up a must-watch matchup between Mines top defense and Lincoln Memorial’s sharp-shooting offense.
Player to watch: Ben Boone — Like Lincoln Memorial, Mines has an incredible duo in Brenden Sullivan and Kobi Betts that we’ve spoken about frequently this season. But Boone, the West Region tournament’s Most Outstanding Player, could be a sneaky factor, shooting 65 percent in the region tournament and sparking a defense that allowed just 104 points in its two victories.

No. 6 Truman — The Bulldogs are Elite for the first time this millennium, last reaching the Elite Eight in 1999 (do we go terrible cliche and blare a certain Prince song?). The bottom line: this team impressed from opening tip to this moment. All five starters averaged in double figures for the season with Cade McKnight leading the way at 17.3 points per game.
Player to watch: Dylan Peeters — The big man came out scorching hot to the season, posting six-straight double-doubles. He had a quiet first game in the Midwest Region tournament, but came on in game two. Peeters controls the paint for the Bulldogs, leading the team in rebounding and blocks, while finishing second in steals.

No. 7 West Liberty — I took a lot of heat for putting the Hilltoppers in my final Power 10 of the regular season, but as I always say, I look at the now and how the overall record may be deceiving. West Liberty, once again, led the country in scoring offense with 102.0 points per game. And while they have four losses, three came in a one-week span in an ever-so-odd year. West Liberty is on a 14-1 run to the Elite Eight, including knocking off No. 15 Charleston (WV) and No. 9 Hillsdale to reach the Elite Eight.
Player to watch: Marlon Moore, Jr. — This team is loaded with scorers, but Moore, Jr. had an interesting regional. He opened and closed with a double-double but somewhat disappeared in foul trouble in the second game. He is a huge spark off the bench that can provide offense and presence in the paint.

No. 8 Daemen — The Wildcats are the second team making their Elite Eight debut this season. Daemen closed the season playing East Region heavyweights St. Thomas Aquinas four times in 17 days, and its 71-70 thriller in the final got the Wildcats over the hump.
Player to watch: Andrew Sischo — The Wildcats have four players averaging in double-digit scoring, but let’s face reality. This team goes as Sischo goes. He scored a game-high 25 points in the last win, 17 of which came in the second half. He doesn’t just play big, he shines when it matters most.