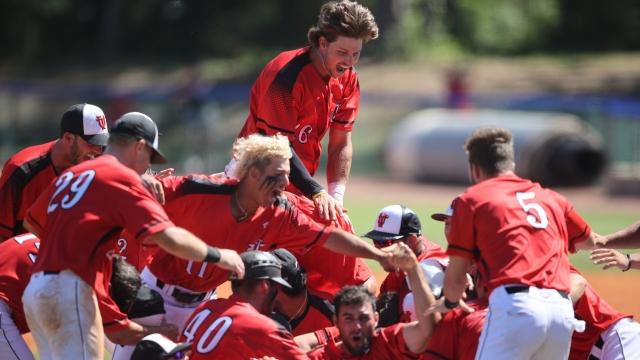 A rainy Memorial Day weekend forced an extra day of regional play, but the final eight in the DII baseball championship are set. Play moves to the USA Baseball National Training Complex in Cary, N.C. for the finals beginning Saturday, June 5.

Before first pitch, let’s take a look at the field of eight. It certainly is an interesting field. There are two Nazarenes, Trevecca and Northwest, and that is believed to be a tournament first. Not only are the Trojans and Nighthawks making their tournament debuts but it is also the first time their conferences — the G-MAC and GNAC, respectively — are represented in tournament history.

The other end of the spectrum couldn’t be more of an opposite. Central Missouri is the winningest program of the 2000s, while Tampa has the second most DII baseball championships of all time.

How’s the rest of the field look?

Central Missouri: The Mules were in the top 3 of our Power 10 from the preseason to the very end, finishing No. 1 in the final rankings before the tournament. Central Missouri battled with Colorado Mesa in two thrilling semifinals games back in 2019, so you can be sure that they are hungry to get to that title game. The experience and talent is certainly there as this may be the deepest team in Cary.

Player to watch: Honestly, all of them. With no disrespect to Dusty Stroup and his breakout, 20-home run season, keep your eyes on Erik Webb. Last time in Cary, he hit .318 with a home run, so we know he’s comfortable under the big lights.

Seton Hill: The Griffins are returning to Cary for the first time since 2014. We’ve talked a lot about this pitching staff, and deservedly so with the top ERA in DII (3.01), second best strikeout-to-walk ratio (4.40) and second-best WHIP (1.14) in DII, but don’t sleep on these hitters. The top three — Tommy Pellis, Derek Orndorff and Owen Sabol — have a blend of contact, power and speed that rivals any lineup in Cary.

Player to watch: Tommy Pellis — Pellis came out of the gates red hot and never slowed down. He was one of two All Americans from the PSAC and led Seton Hill in nearly every offensive category, hitting .371 with a 1.220 OPS, 14 home runs and 42 RBIs.

Angelo State: The Rams had one of our scariest lineups entering the tournament and they showed just why, clinching the South Central region in an 18-4 stomping of West Texas A&M. The opposite of Seton Hill, we’ve talked so much about this lineup all season but you may sleep on the pitching staff. Trent Baker (13-1, 2.06, ERA, 0.97 WHIP and 110 strikeouts) leads a staff that finished among the DII top 10 in ERA, strikeout-to-walk ratio, WHIP and win-loss percentage.

Player to watch: Josh Elvir — He has a DII player of the year and many an All-American nod under his belt. Now, Elvir is in Cary for the first time and ready to see what else he can add to the trophy case. Elvir had another monster season hitting .397 with a 1.279 OPS, 21 doubles,13 home runs, 58 RBIs and was 16-for-20 in stolen bases.

Trevecca Nazarene: Trevecca Nazarene vs. Tampa in Round 1 sets up a modern-day Trojan War. The Trojans are making their debut against one of the most successful teams in tournament history in the Spartans. Trevecca was projected fifth in their conference preseason poll but rolled to both the regular-season and tournament titles and are entering the finals winners of 12 of their last 13.

Player to watch: Braden Odom, OF — Odom leads the Trojans in just about every offensive category, slashing .361/.428/.602 with 12 doubles, five triples, eight home runs, 51 RBIs and 15 stolen bases while leading the G-MAC in runs scored with 51.

Tampa: The Spartans won their 19th South regional championship, taking down West Florida in back-to-back games. You may have forgotten, but Tampa is the defending champions, winning its eighth national championship in 2019. One more trophy ties them with SSC rival Florida Southern for the most in DII baseball history. Tampa has gone back-to-back on two different occasions, most recently in in 2006-07.

Player to watch: Jordan Leasure, RHP — Leasure took home the SSC pitcher of the year and earned NCBWA All-American honors as a relief pitcher. He pitched to a 0.68 ERA and had a 14.5 strikeout-per-nine rate.

Wingate: The Bulldogs transformation is complete. They have quietly snuck under the radar the past few seasons, but now they are heading to Cary for the first time in program history. And what a daunting task it was to get here: Wingate’s Southeast region has the No. 8 team, No. 11 team and No. 19-ranked team in DII to go with a Columbus State team that we pegged with one of the scariest lineups in the entire tournament.

Player to watch: McCann Mellett — Mellett had a fine season, but he has been on a whole new level in the tournament. Last week, Mellett went 9-for-17 with nine runs scored, two home runs and eight RBIs. Wingate is hoping that the few days of rest hasn’t cooled off the hottest hitter in May.

Southern New Hampshire: The Penmen have been no strangers to Cary recently, with this their third trip since 2012. In SNHU’s most recent trip in 2018, the team went far, but couldn’t get around the would-be national champion Augustana (SD), who the Penmen lost to twice. As usual, head coach Scott Loiseau has put together a team with incredible balance: the Penmen are slashing .315/.420/.508 while pitching to a 3.31 ERA and 1.18 WHIP, both of which are top-10 marks in DII.

Player to watch: Jeffrey Praml — We’re not going with the top hitter or statistically best pitcher on the team. Instead, keep your eye on Jeffrey Praml. The season numbers don’t jump off the page, sitting at 7-2 with a 4.03 ERA, but his last two starts in the regionals? Praml tossed a complete game, allowing one run and striking out a season-high 14 in the opener before going eight innings and holding Molloy to just two runs in the East clincher.

Northwest Nazarene: We’d have to go through every bracket since the tournament’s inception to confirm, but it is not often you see a team from Idaho make it this far in the bracket. Northwest Nazarene was a mere 24-24 in the last full season of DII baseball, so this 10-game improvement is quite impressive, especially when you consider they were one of three teams to beat No. 1 Colorado Mesa in the regular season.

Player to watch: Blake McFadden and Max Holtzclaw — OK, we cheated, but this two-headed monster in the bullpen has been a large reason for the Nighthawks turnaround. Combined, the duo is 9-1 with five saves, a 2.13 ERA and 71 strikeouts in 50.2 innings pitched. If the Nighthawks keep it close, these two are a big advantage.