Women's college soccer: Trio of ACC matches lead what to watch this week


All eyes will be on the ACC this week in the world of women’s soccer. There will be four top-25 matchups, three top-15 matchups and one top-5 matchup this week in the conference that has produced over 25 national champions and defending champ Florida State.

It won’t be all ACC though, as several surging teams like the newly-ranked No. 19 Florida Gators will also be in action. Outside of that, keep an eye on a few teams who are in need of bounce-back wins this week.

Check out all the action and more below:

Expectations were high for UCLA this season — it clocked in at No. 4 in the United Soccer Coaches preseason poll and even rose to No. 2 after a couple of weeks of stellar play that included victories over defending national champion Florida State and the Florida. After their win over the Gators, the Bruins slipped up against Santa Clara, where they lost 2-0. Since then, all UCLA has kept falling in the rankings. They now sit at No. 22 and are looking to take on a Colorado team that needs a win against a ranked opponent. The Buffs sit at 1-1-1 in Pac-12 play and are also looking for a bounce-back win after falling out of the rankings this week. If Colorado was to snag a victory in Los Angeles, it’ll be its second match of the weekend against another LA team in Southern Cal. For UCLA, its next match comes against Utah. Both will be played on Oct. 13.

GATORS JOIN THE PARTY: Top 3 remain the same and Florida cracks the top 25 in this week’s rankings

Louisville versus Clemson kicks off a weekend full of ranked ACC action. This top-20 matchup will be a good test for both of these squads if they want to jump into the top-tier of ACC women’s soccer currently heralded by the likes of Florida State, Virginia and North Carolina. The Tigers currently sit at 2-2 in conference play after defeating Virginia Tech and Notre Dame and losing to Florida State and UNC. Clemson looks for its first ranked win of the season against Louisville. As for the Cardinals, they enter this match 3-1 in ACC play and in third place in the conference. They have conference wins over Syracuse, Wake Forest and Boston College with their only loss coming against North Carolina.

As both of these teams approach the mid-point of the season, they’ll be reliant on where they succeed the most. For Louisville that comes on the offensive end as they have scored the fourth-most goals in the ACC so far this season. It’ll be a great matchup for both teams as Clemson’s strength comes on the defensive end, only allowing 6 goals on the year so far and boasting the third-best goals allowed average per game in the ACC.

This will be the second time the two participants of the Tobacco Road rivalry meet this year. The first match was all Tar Heels as North Carolina took care of business winning 2-0 in Chapel Hill. Duke’s defense will have to show up as UNC is led by a trio of players who are the heart of their offense. Brianna Pinto, Bridgette Andrzejewski and Alessia Russo combine for 18 goals and 44 points off the season this far with Pinto netting seven, Andrzejewski netting five and Russo scoring six. A win for Carolina will give them even more momentum heading into the final weeks of regular season play. They are fresh off of a top-10 victory over a then-No. 8 Clemson team. The Blue Devils have recorded one win and three ties in conference play thus far and are tied for fifth in the ACC with Clemson and Notre Dame. Check out a full preview of the match here.

ACC PLAY IN FULL-SWING: 5 things to know about the conference this year 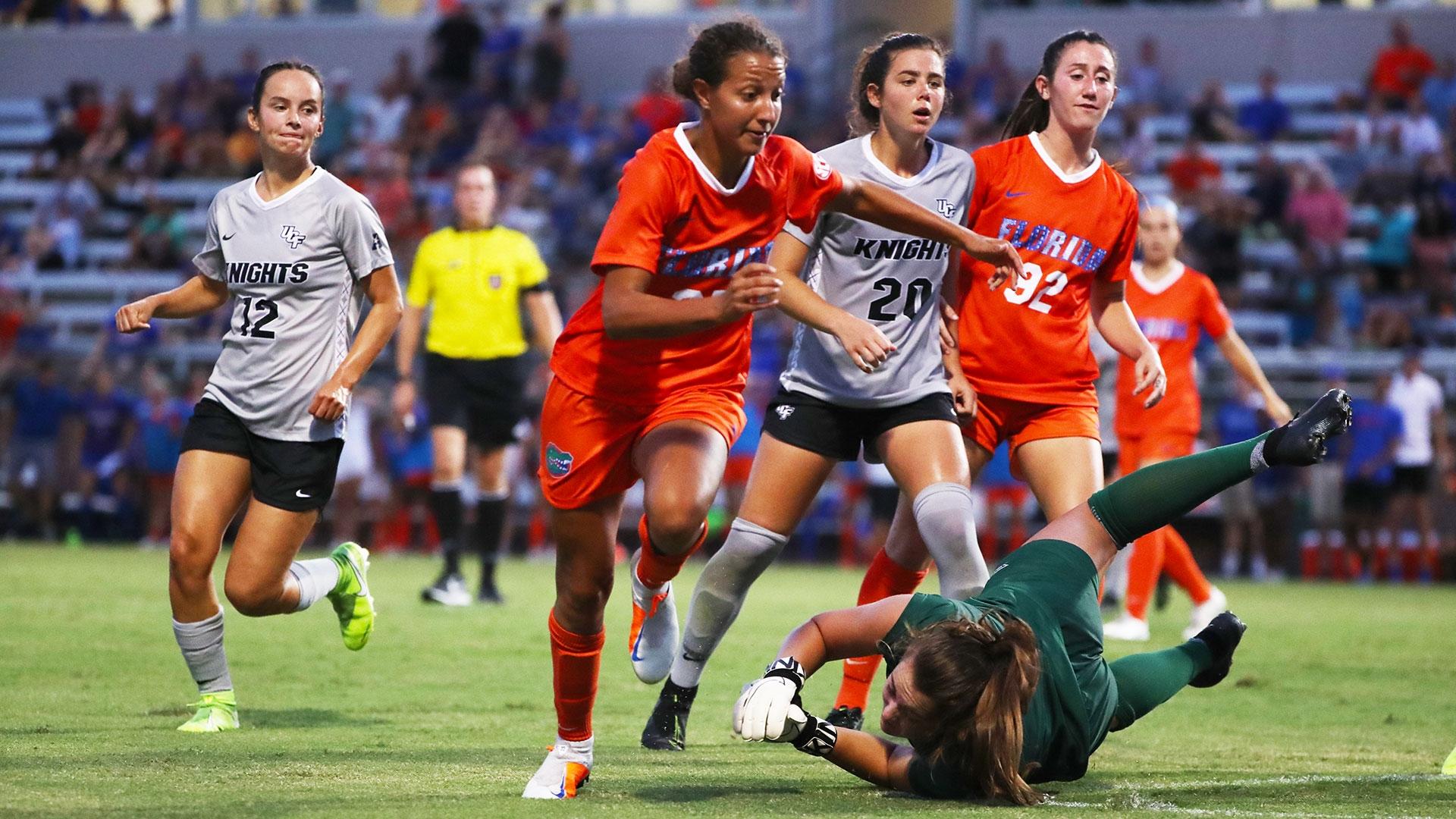 Leading scorer for the Gators, Vanessa Kara will hope to continue Florida’s hot-streak versus Kentucky

Florida came out of the gate this season with a little bit of a limp. The Gators dropped four out of their first six matches to start the season 2-4. But it seems like they got their losses out of the way early as Florida has surged, winning every match since their early four-match skid. UF is currently 4-0 and atop the SEC with South Carolina, and it’ll look to be 6-0 in the conference after this weekend. They’re currently led by senior forward Vanessa Kara who has clocked eight goals and 16 points so far this season. She’s tied for second in the SEC in total goals scored. Kentucky will head to Gainesville hoping to stop the piping-hot Gators as they are looking for any glimmer of victory they can find. The Wildcats were undefeated at 5-0-2 until going on a six-game skid. Their losses came against the likes of Auburn, Central Michigan, Texas A&M and Indiana to name a few. This will be the second game of the weekend for both the Wildcats and the Gators as Florida will be at Ole Miss on Thursday, Oct. 10 and Kentucky will host No. 7 South Carolina for a potential upset bid on the same day. 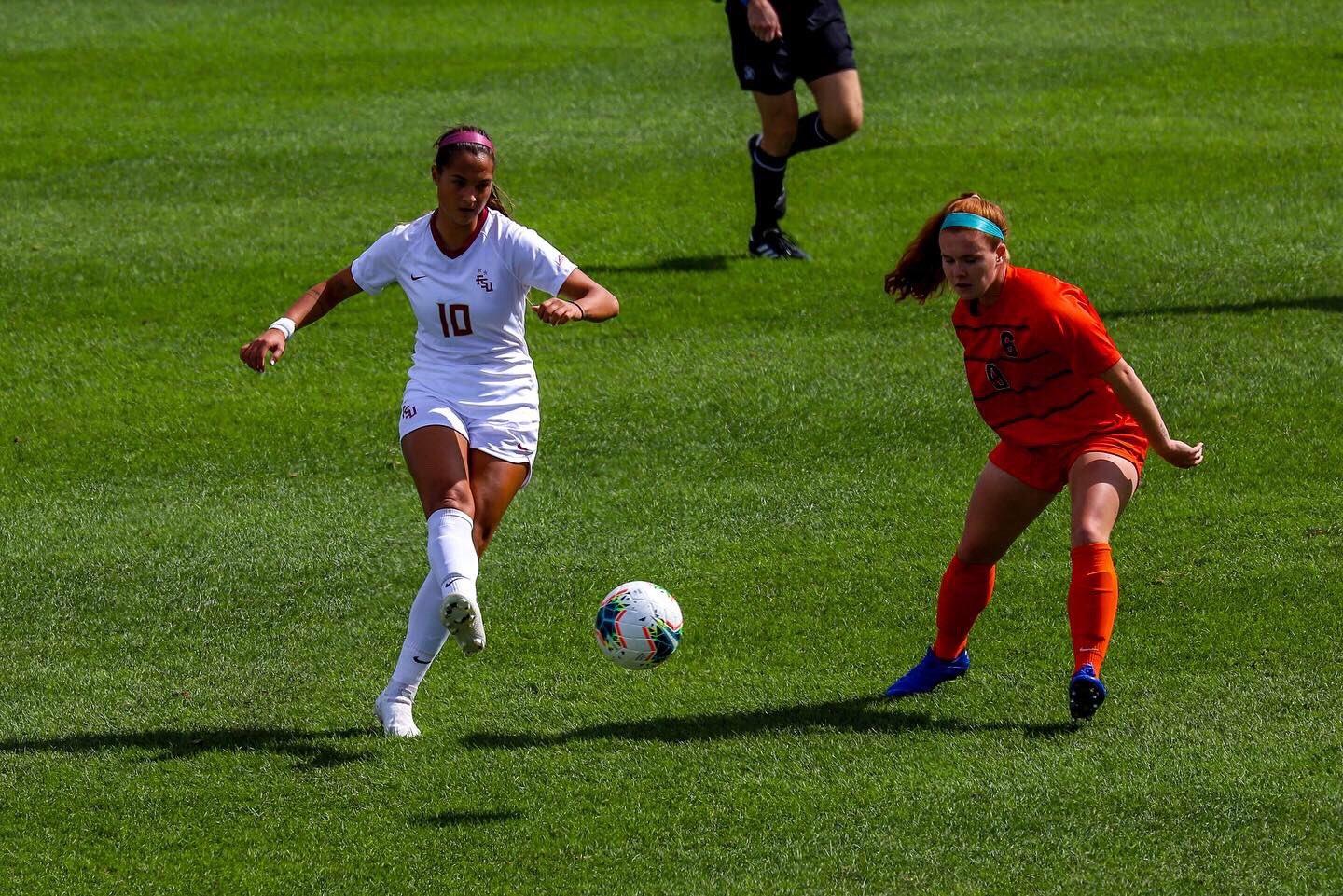 Florida State will need their star Deyna Castellanos to show up if they want to beat No. Virginia

It doesn’t get much better than one of the last two undefeated teams in Division I women’s soccer and No. 1 in the country meeting the defending national champions in a top-5 matchup in conference play. Virginia will travel to Tallahassee on Oct. 13 to face Florida State in a battle that will encompass two of the most prolific talents in the country and two of the most powerful offenses in the ACC. Both the Cavaliers and the Seminoles are top three in the conference in goals scored — FSU with 31 on the year, UVA with 41. Both offenses are led by natural goal scorers. For the Hoos, it is freshman forward Diana Ordonez. Ordonez has taken the women’s college soccer world by storm this season, netting 12 goals so far on the year. FSU has their own weapon — one of the most seasoned players in the game, Deyna Castellanos. The senior Venezuelan forward leads the Noles in goals with seven, assists with eight and points with 22. It’ll be quite the matchup in the ACC, but both of these teams will have to get by their first opponent of the weekend before squaring off against their top-5 opponent. FSU will be in Blacksburg on Oct. 10 to face Virginia Tech, as Virginia will be in Raleigh to battle NC State.