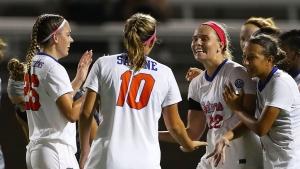 
The Gators have entered the chat room. After knocking off No. 12 Texas A&M last week, Florida went from being unranked to No. 19 in the nation. The Gators also sit atop the SEC, undefeated and tied with national contenders and No. 7 South Carolina.

Although UF only had one match last week, they have been surging as of late. The Gators started the season off pretty slow, dropping four out of their first six matches to Southern California, UCLA, Florida State and Central Florida, but have bounced back recently. The orange and blue are currently riding a six-game winning streak, putting them as potential favorites to take home the regular-season SEC crown.

Keep an eye on Oct. 27 when the Gamecocks come to Gainesville. South Carolina is the other team undefeated in SEC play and has been ranked in the top-10 every week since the United Soccer Coaches preseason poll.

Elsewhere in this week’s poll was the consistent dominance of the nation’s top three teams being recognized. No. 1 Virginia, No. 2 Stanford and No. 3 North Carolina have solidified themselves as the top tier of women’s soccer, as they are the top 3 for the second consecutive week. Well into conference play, the Cavaliers, Cardinal and Tar Heels sit at 10-0-2, 10-1-0 and 11-1-0, respectively.

ACC PLAY: 5 things you need to know about the conference now that ACC play is underway

Check out the full rankings below:

After tying Santa Clara 2-2 on Oct. 5, BYU relinquished their quest for perfection. Although the Broncos tied in their West Coast Conference match, their effort shouldn’t go unrecognized as they had to battle back to earn the draw, as they gave up two goals against Santa Clara early in the match.

BYU and Virginia remain the only two undefeated teams in Division I women’s soccer. Central Michigan was a part of this club last week, but the Chippewas dropped their first match of the season last week losing to Western Michigan 1-0 on Oct. 4.

No. 6 BYU and No. 1 Virginia will continue to embark on conference play this week, as the two top-10 teams will hope to garner more momentum to make a run in the postseason.

In the top 10, both Florida State and Southern Cal jumped a spot — FSU moving from No. 6 into the top-5 at No. 5 and USC moving from No. 5 to No. 4. Both the Seminoles and the Trojans had stellar weeks in their respective conferences, as USC knocked off both Arizona State and now-No. 25 Arizona and Florida State beat Pittsburgh to extend their winning streak to eight-straight victories.

There are five newcomers to this week’s top 25. Rutgers, UCF, Santa Clara and Arizona all joined the party, but no team had a bigger leap than Florida. The Gators jumped the most amount of spots, going from unranked to No. 19 after winning their lone game last week versus Texas A&M.

Oklahoma State jumped up seven spots from No. 25 to No. 18. This isn’t the first time the Cowgirls have made that move, as they have been going back and forth between those two ranks for four-straight weeks now.

As for fallers, UCLA continues to plummet. The Bruins started off the season as potential Pac-12 contenders but have been slowly falling in the rankings since the season started. Their preseason rank was No. 4, and after early-season success, UCLA got bumped up to No. 2 at one point before they started to plummet. They currently sit at No. 22.

Texas A&M also fell. The Aggies dropped five spots from No. 12 to No. 17 after dropping a crucial SEC match against Florida.

This week is the week for the ACC to determine who can and who cannot compete for the conference crown. It’ll be a round-robin of matches featuring ranked teams as Virginia Tech hosts No. 5 Florida State, No. 15 Louisville takes on No. 9 Clemson and No. 11 Duke ignites the tobacco road rivalry against No. 2 North Carolina for the second time this season. And that’s just on Thursday. Sunday offers a pair of important matches with Duke hosting Clemson and the headliner for the weekend, Florida State vs. No. 1 Virginia.

The Big Ten will feature a notable match against two surging teams, Iowa and No. 21 Rutgers. The Hawkeyes will host the Scarlet Knights on Oct. 11. Although Iowa isn’t ranked, they are coming off of a pair of victories versus Nebraska and Michigan State. Rutgers, who has been in and out of the top 25 all season, is riding a winning-streak of its own after knocking off Penn State and Northwestern last week.

Both Texas and No. 14 Texas Tech are in action in the Big 12 this week. The Longhorns will host No. 18 Oklahoma State on Oct. 11, as the Red Raiders face Kansas on the 13th. Texas was riding a four-game winning streak before losing in double-overtime against West Virginia Oct. 6. They’ll look to bounce back against the Cowgirls.

Texas Tech, on the other hand, hasn’t been beaten since Aug. 25, when they lost to New Mexico. Last week they beat Iowa State. The Red Raiders currently sit at 10-1-1 overall.

Colorado, who fell from the rankings, has multiple opportunities this week to try and claw back in. They will face some southern California competition this week, as the Buffaloes take on No. 22 UCLA and No. 4 USC in the same weekend. This will be a great chance for Colorado to break into the upper-echelon of the Pac-12, as they hope to bounce back after losing and tying conference games last weekend. They face the Bruins on Oct. 10 and the Trojans on the 13th.

The surging Florida Gators will be back in action this weekend when they face Ole Miss and Kentucky. The orange and blue are fresh off of their SEC upset when they knocked off Texas A&M, 3-1, to hand the Aggies their first SEC loss on Oct. 6. They’ll hope to continue the perfect streak in the SEC alive this weekend.

Elsewhere in the NCAA, No. 6 BYU, No. 10 Georgetown and No. 8 Memphis are in action this weekend. BYU will try to remain unbeaten against Pepperdine on Oct. 9 and Pacific on the 12th. Memphis will travel to Cincinnati to face the Bearcats on Oct. 10 and Georgetown will host Creighton to round out the weekend on the 13th.