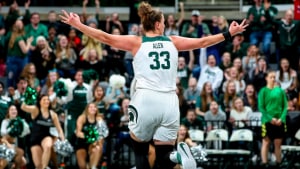 Michigan State capped a 2-0 week with an upset of No. 3 Oregon on Sunday to register the program’s highest regular season win against a team ranked in The Associated Press women’s college basketball poll since Dec. 2, 2004, when the Spartans beat No. 3 Notre Dame.

📰 EXTRA EXTRA read all about it! Jenna Allen adds another honor, capturing B1G Player of the Week! @SuzyMerchant

Oregon trailed by 11 early in the fourth quarter but rallied to tie it at 75. It was 77-all when Sidney Cooks put Michigan State back ahead with a shot from the top of the key. Shortly after, McCutcheon connected from beyond the arc to push the lead to five.

Leading 82-79, Michigan State put the game out of reach when Allen connected on a 3-pointer with 35 seconds to play to give the Spartans an 85-79 lead. The Ducks came in averaging 94.7 points per game, the top mark in the nation, but Oregon’s difficulty at the defensive end was a major factor Sunday. The Ducks allowed Michigan State to shoot 58 percent from the field — and over 60 percent in both the second and third quarters.

On Dec. 5, Michigan State started the week with a 102-58 road victory over Oakland as McCutcheon (19) and Allen (16) combined for 35 points. Six different Spartans reached double-figures in points as Michigan State scored a season-high 102 points.

During a stretch overlapping the end of the first quarter and start of the second, McCutcheon and Allen combined to score 28 straight points for the Spartans, as they rallied from an early 11-3 deficit. After a timeout, the Spartans closed out the first frame with a 17-4 run. That helped Michigan State turn that early deficit into a 31-15 lead in the second quarter. The Spartans never looked back, recording their 11th consecutive win over the Golden Grizzlies.
Michigan State’s lone setback this season came against No. 10 North Carolina State, 78-74, on Nov. 22 in Cancun, Mexico.  The Spartans will return to action on Dec. 16 at Hartford.