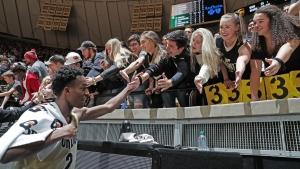 
There’s home court advantage in college basketball. And then there’s the Big Ten.

That means big crowds and wall-shaking, focus-rattling, poise-melting noise. The Big Ten led the nation in attendance for the 43rd consecutive season last year; good news for the finances but bad news for the visiting teams. Especially this season. “The league’s a monster,” Rutgers coach Steve Pikiell said. And trying to win on the road? “It’s the most difficult thing to do in college basketball.”

So it would seem. Throw out struggling Northwestern and Nebraska, and the other 12 Big Ten teams are 106-10 on home courts this season. There had been 37 conference games played through Sunday, and the visiting teams had managed to win only five of them. Rutgers is 11-0 in its friendly confines, Maryland 10-0.

So there are plenty of shark tanks out there in Big Ten, waiting for their next meal. But the epicenter of inhospitality would seem to be Mackey Arena — Purdue’s thunderous circular cauldron that, for visitors, is one part quicksand. One part Bermuda Triangle, and almost always an addition to the right side of their record.

Michigan State had won eight games in a row going into last weekend. But before the No. 9 Spartans could ask directions to the nearest fire escape, the Boilermakers were up 19-4. It ended 71-42, the worst Michigan State loss ever as a top-10 team. “I laugh every day with my staff, how everybody wants to be the head coach,” Izzo said. “It ain’t as much fun as you think it is. Hell, I don’t want to be the head coach today.”

Virginia was 7-0, ranked No. 5 and allowing 40.8 points a game when the Cavaliers landed in Indiana in December.  Purdue had 32 points before halftime and plastered Virginia 69-40 — the fourth lowest scoring output for Virginia in the shot clock era.”It kind of takes your breath away,” Cavaliers coach Tony Bennett said of the onslaught.

That made two top-10 visitors to Mackey Arena this season, who left town with two 29-point thrashings. Thanks for coming.

How do the Boilermakers love their house of horrors? Let us count the ways.

Purdue is 5-1 its last six home games against opponents ranked in the top-10, winning those five by an average of 14.6 points.

The Boilermakers haven’t lost by double figures in Mackey Arena since 2014, going back 96 games.

Purdue has won 15 consecutive Big Ten games at home, 12 by double digits. The Boilermakers have played 49 home Big Ten games since 2014-15. They have lost four.

Purdue is 71-5 in Mackey Arena since the start of the 2015-16 season. Of those five losses, Minnesota won in overtime, Ohio State on a put-back at the buzzer, Villanova escaped by three, Texas rallied from five down in the final three minutes, and Iowa came back from 17 behind at halftime. In other words, Purdue ain’t that far from 76-0.

Eighteen of the past 24 Mackey Arena visitors have shot under 40 percent. Only four of the past 93 have topped 50 percent.