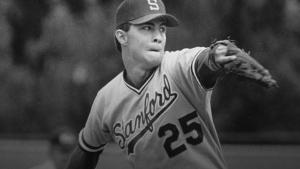 
Six more baseball legends will be enshrined in the National Baseball Hall of Fame on Sunday, July 21 in Cooperstown, New York. That brings the all-time inductee total to 335, including 232 former Major League Baseball players.

Of these players forever immortalized in the halls of the museum, 58 once took the field collegiately. Here are the former college baseball players represented in the National Baseball Hall of Fame, including Class of 2019 inductee Mike Mussina:

Michigan has the most representatives with three (Barry Larkin, Charles Gehringer, George Sisler). Columbia, East Central, Fordham, Minnesota and USC all have two former players in the Hall. Overall, 51 NCAA schools are represented.

This list focuses on Hall of Famers who played for their school’s baseball program before embarking on professional careers. It excludes, for example, Larry Doby, who was a member of Virginia Union’s 1942 conference champion basketball team, and Jim O’Rourke, who graduated from Yale Law School 15 years after his 1872 pro debut.

Then there’s the case of Johnny Mize. A bat boy for Piedmont College at age 15, Mize’s talent was so apparent that he played first base for Piedmont for three years — as a high schooler. Piedmont later named its basketball arena after him.

Here are more facts to know about the standout college careers of some notable Baseball Hall of Famers.

Mussina went 25-12 with a 2.78 ERA and 250 strikeouts in three seasons at Stanford. His 14 wins as a junior in 1990 is second-most in program history. Mussina was part of two College World Series teams. As a freshman in 1988, Stanford captured its second national title; in 1990, the Cardinal reached the CWS semifinals. Mussina (270 wins, 18 MLB seasons) is the only former collegiate player of six Class of 2019 inductees.

MUSSINA AT STANFORD: History, record and notable moments from the new Hall of Famer

Biggio was a two-time All-Big East catcher and a 1987 First Team All-American in three years with the Pirates. He finished his Seton Hall tenure with a .342 batting average and ranks in the top 10 in 20 of the program’s single-season and career records. In 1987, Biggio led the Pirates to their first Big East championship. Biggio played 20 Major League seasons with the Houston Astros and is one of 32 players to reach 3,000 career hits.

Before Gwynn racked up 3,141 hits in 20 years as a San Diego Padre, the local legend was a two-sport star at San Diego State. Gwynn played basketball all four years, averaging 8.6 points and 5.5 assists per game as the Aztecs’ point guard. He still holds the program’s all-time assists record with 590. On the baseball diamond for three years, he was a two-time All-American. He batted .416 with 27 extra base hits as a senior in 1981 before being drafted in the third round. Gwynn returned as SDSU’s baseball coach from 2002-14.

Winfield is the only athlete to drafted by four different professional leagues (MLB, NBA, ABA, NFL). In the end, he chose baseball and played 22 years. A two-way player for the Gophers, Winfield won 1973 College World Series Most Outstanding Player honors despite Minnesota’s third-place finish. He struck out 29 in 17.1 innings on the mound and batted .467 with a homer and two RBIs in Omaha.

Ohio reached its only College World Series in 1970 behind the power bat and slick fielding of Schmidt. He was named an All-American twice and first-team All-MAC three times in his four years with the Bobcats, finishing with a .330 average and 27 home runs. He went on to crush 548 career homers and win NL MVP three times with the Philadelphia Phillies.

Seaver only pitched one season for the Trojans but the righty was dominant in 1965. He finished 10-2 with a 2.47 ERA and was named to the All-Pac-8 squad as a junior, following his first two years at Fresno City College. He signed with the New York Mets in 1966 and emerged as “The Franchise.” Seaver won 1967 Rookie of the Year, three Cy Young Awards and was the leader of the Miracle Mets’ 1969 World Series run.

Gibson was another example of multi-sport star, excelling for both the Bluejays’ baseball and basketball teams. On the hardwood, Gibson averaged more than 20 points per game and has his No. 45 retired. His Creighton baseball stats are unknown, but he played both pitcher and outfielder. Gibson was an eight-time All-Star and two-time World Series MVP as a St. Louis Cardinal.

Robinson was a letter-winner in baseball, football, basketball and track and field at UCLA. He twice led the nation in punt return average in football and won the 1940 NCAA long jump title in track and field. Baseball was actually his most troublesome sport. He hit just .097 as UCLA’s starting shortstop in 1940, the only year he played collegiate baseball. But that wouldn’t stop him from breaking baseball’s color barrier in 1947. The Dodger legend was named Rookie of the Year in that groundbreaking year and later won 1949 NL MVP.

FOUR-SPORT STAR: Before the Dodgers, Jackie Robinson excelled in four sports at UCLA

Gehrig was both a pitcher and slugger for Columbia baseball, as well as starting fullback and defensive tackle for the Lions’ football team. He’s known for hitting two mammoth home runs at Columbia’s South Field, one reportedly soaring into a second-story window of the journalism school more than 400 feet away and another landing across College Walk, then a through city street, according to Columbia Athletics. One of the greatest Yankees of all time, Gehrig played in 2,130 consecutive games and won six World Series titles before his career and life was cut short by ALS.

Share. Twitter Facebook Google+ Pinterest LinkedIn Tumblr Email
Previous ArticleHow the NCAA DII men’s basketball tournament works: History, important dates, and FAQs
Next Article Justin Haley talks about the only time he got in a fight with another driver