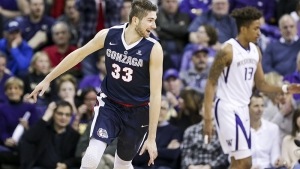 Killian Tillie played in his first game for Gonzaga this season on Saturday against Santa Clara. He logged nine minutes, scored five points and grabbed two rebounds in his first game back from surgery to repair a stress fracture in his ankle. But he’ll play a much bigger role than that the rest of the way.

It’s pretty remarkable that the Bulldogs got off to a 13-2 start without Tillie, because he was dynamite last year. Tillie averaged 22.9 points and 8.9 rebounds per 40 minutes, but that doesn’t tell the whole story. He’s an elite defender, but perhaps most importantly, one of the best shooting big men in the sport. Tillie made 58 percent of his field goals last season including a blistering 47.9 percent of his 3s on four attempts per game. When your center is making almost half of his 3s, offense becomes much, much easier for the other four guys.

But Gonzaga’s roster has changed since then. Most notably, Brandon Clarke has blossomed into a superstar, and he plays the same position as Tillie. The Bulldogs will try to make it work with both of them on the floor at the same time. There’s inherent risk in that; Gonzaga has the No. 1 offense in the country right now. But the best version of a Clarke-Tillie pairing can elevate the Zags’ defensive ceiling, something they’ll need to do in order to win the national title.

The Bulldogs will be one of the biggest teams in the country. But they won’t have to sacrifice spacing.

Tillie might not start right away, but he likely will by the time March rolls around. He’s too good not to.

And the Bulldogs can’t bench Clarke. He’s averaging 17 points, 8.1 rebounds and 3.3 blocks on 68.9 percent shooting. So assuming the two start together in the frontcourt, the Zags are going to be big. Tillie is 6-10, Clarke is 6-8 (but plays bigger than his listed size), and Rui Hachimura is a 6-8 combo forward who’s arguably the best physical specimen in the country not named Zion Williamson. Zach Norvell, at 6-5, would have plus positional size at shooting guard.

Now, that sounds tantalizing. But if you have to choose between size or shooting in 2019, you’re taking shooting. Fortunately for Gonzaga, it has both. The Bulldogs will have the benefit of being big, but sacrificing no spacing in the process. In fact, Tillie helps the team’s spacing considering how lethal of a stretch five he is.

Gonzaga could start three guys who shoot better than 40 percent from 3-point range in Tillie, Hachimura and Josh Perkins. Norvell is probably the best shooter of the bunch, even if his percentage doesn’t say so, and Clarke is passable from deep. When one of the largest teams in the country can also play five out, it’s a scary, scary thought for defenses.

The Bulldogs already have the best offense in the country, but offensive rebounding hasn’t been much of an emphasis (that’s because, you know, they rarely miss). But when you have a front line of Tillie, Clarke and Hachimura, you’d be foolish not to crash the glass with some aggression. Gonzaga ranks 86th in offensive rebounding rate right now. Look for that to rise as Tillie’s role starts to increase.

Tillie was one of the best defenders on Gonzaga last season, averaging a block per game and posting the second-lowest defensive rating on the team. He always knows where to be and has good mobility for his size.

But Clarke disrupts offenses. He’s averaging more than three blocks per game and dissuades drivers from even attempting to come inside. Clarke isn’t as cerebral as Tillie, but he’s more explosive vertically and laterally, so he’ll likely fare better guarding stretch fours than Tillie. Johnathan Williams did that for Gonzaga last season, while Tillie did his work near the hoop.

But Williams wasn’t the rim-protector Clarke is. Just because Clarke can do both doesn’t mean you want one of the best shot-blockers in the land constantly defending ball screens. Then again, Tillie is competent — and that’s probably underselling it — as a shot blocker. But he might not have the speed to hang with some combo forwards.

MORE: 7 teams who can jump in the second half

This will be an interesting push-and-pull for Mark Few. It will be matchup dependent. Keep an eye on Clarke’s shot-blocking totals once Tillie starts to play heavy minutes, and whose role changes more.

Hachimura’s role will change on both ends

Tillie’s return might have an even bigger effect on Hachimura, who will have to slide from the four to the three. The good news: Tillie’s shooting means Hachimura will still have open driving lanes, and his rumbles to the rim should continue. Hachimura is averaging 21.4 points and 6.4 rebounds on 59.5 percent shooting. He’s been absurdly efficient and good.

He’ll probably do the same things on offense with Tillie in the lineup, but he might see a decrease in shot attempts. And there will be a defensive adjustment. Some WCC schools play three-guard lineups, and if Hachimura starts at small forward, he might be forced to chase someone way smaller than him. Fortunately for Gonzaga, Hachimura is incredibly athletic for his size, but he’ll have to expend more energy. It could take a toll on his offense.

But that’s a scarier proposition for the opponent than Gonzaga. For those teams who start three-guard lineups, good luck with your 6-3 shooter trying to handle Hachimura in the post. Spoiler alert: it won’t end well. Gonzaga doesn’t post up a ton, nor should it, considering its shooters. But Hachimura have huge mismatches on certain nights, and the Zags would be wise to exploit them.

MORE: How many times a 1-seed has won March Madness

Gonzaga may look a bit clunky at first as it tries to integrate Tillie back into the gameplan. But that’s OK, and to be expected.

Because if Few is able to optimize this roster, there might not be a more talented team in college basketball outside of Duke.