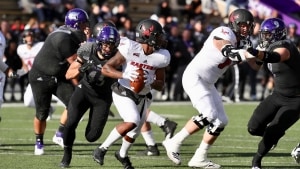 Weber State comes out hot, holds off No. 3 Eastern Washington in 14-6 upset


OGDEN – Eastern Washington was ranked third in the nation and entered Saturday’s game with one of the top offenses in the country. But it was 13th ranked Weber State who knocked off the Eagles with a gritty 14-6 win Saturday afternoon on Homecoming at Stewart Stadium.

The Eagles were third in the nation in total offense at 570 yards per game but the Wildcats held them to 247 yards of total offense, with just 62 yards rushing.

All of Weber State’s scoring came in the first nine minutes of the game as the ‘Cats got off to a  great start. Freshman Josh Davis returned a punt 75 yards for a touchdown less than two minutes into the game.

The Wildcats then scored as Jake Constantine found Rashid Shaheed for a 38-yard touchdown to give WSU a 14-0 lead with 6:24 to play. The Wildcats did not score again but it was the defense that stepped up to secure the win.

FCS upsets: Furman over No. 4 Wofford | Blue Hens take down No. 6 Elon

The Eagles managed just two field goals in the game as the ‘Cats forced two interceptions, both coming in the fourth quarter, and had four sacks.

With Eastern Washington driving into Wildcat territory, Jawain Harrison picked off a pass in the end zone that stopped the Eagle drive. Landon Stice had an interception with 1:50 to play that sealed the win for the Wildcats.

On offense, Constantine was 15 of 25 passing for 159 yards and one touchdown. Devon Cooley had five receptions for 46 yards, while Shaheed had three catches for 53 yards.

Treshawn Garrett had 19 carries for 68 yards and moved into 10th in Weber State history in career rushing yards. Davis had 12 carries for 52 yards.

The Wildcats improve to 4-2 overall and 2-1 in Big Sky play. The win over the Eagles was the highest opponent Weber State has beaten since beating No. 3 Cal Poly in the FCS Playoffs in 2008.

WSU is right back home to host Montana State next Saturday at 4 p.m. at Stewart Stadium.