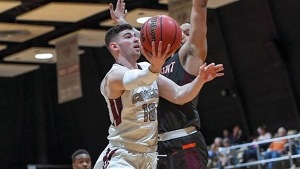 Let’s take a position-by-position look at the statistical leaders through January of the DII men’s basketball season. This is the second installment of our monthly series where we select a dream starting five lineup based purely on stats.

2019 BRACKET: Everything you need to know about the 2019 NCAA DII tournament

Amir Hinton has been DII basketball’s top scorer from opening tip, but let’s talk about Bolte’s January, shall we? On January 17, he had his worst night of the season, registering just eight points, albeit on 80 percent shooting. His other six games in January? He’s averaging 42 points per game, including a DII season-high of 65 points on Jan. 23. The 2018 scoring champion looks like he’s heating up and ready to repeat as the DII scoring leader.

Harper is currently tied for the DII lead in assists at 7.9 per night. He was especially impressive at dropping dimes in January, beginning 2019 with six-straight games with double-digit assists, including a season-high of 19 against a very good Francis Marion team on Jan. 5. Harper also added 16 steals in eight January games, boosting his total to 51 and 12th-best in DII.

Lienhard isn’t going to break any scoring records, averaging just 7.7 points per game, but his presence in the paint earns him a spot on this list. The 6’8″ senior is leading DII in rebounds with 12.4 per game while adding a defensive aspect to his game with 2.6 blocks. Despite the low scoring average, Lienhard has still posted four double-doubles on the season and has more than 20 rebounds in a game twice.

Eberhard isn’t leading DII in any one category, but he is third in field goal percentage at 65.8 percent. This becomes more impressive when you look at the fact that he’s not a big man camping under the basket, and is also accurate while taking 199 shots and averaging 20.5 points per night. Eberhard is the unquestioned leader of the Knights’ sharpshooting squad and a clear candidate for player of the year with impressive stats across the board.

Toppin returns to the lineup after making regular appearances last season. The 6’9″ senior leads all centers in rebounds with 10.3 per game and is second at the position in scoring (17.9 per game) behind last month’s starter, Daemen’s Andrew Sischo. Toppin in also highly efficient, fourth in DII with a 65.1 field goal percentage. He has ten double-doubles on the season, highlighted by a 31-point, 17-rebound performance to close out 2018.