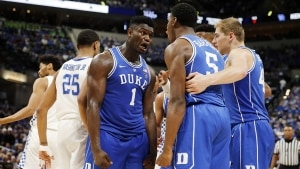 We evaluated the debuts from the top college basketball freshmen

This freshman class is one of the most hyped we’ve had in years. It’s very early, but the rookies have impressed thus far.

Let’s break down how some of the biggest names fared in their debuts.

The guy everyone is talking about, and rightfully so. There’s no use comparing Williamson to other players. His combination of bulk and athleticism is unprecedented. That doesn’t mean he’s the best player we’ve seen come through college basketball in decades, but he was pretty darn good against Kentucky.

Williamson scored 28 points and grabbed seven rebounds against the Wildcats. We knew about the strength and the hops coming in, but his advanced skill level was a bit surprising. Williamson hit several outside jumpers; that was a supposed question mark in his game. He displayed excellent feel and an ability to make plays for others.

Williamson was always going to be a monster at the college level, just by sheer force. But against Kentucky, he looked like a complete player. That’s a scary, scary thought for the rest of the country.

And Williamson isn’t even Duke’s best player right now, even if he leaps off the screen the most. That distinction belongs to Barrett, who scored 33 points and had six assists against Kentucky.

Barrett looks like a way more athletic version of Jalen Rose. There’s a smoothness to the lefty’s game that’s impressive to watch; there’s a little bit of James Harden in him, too. Duke is going to be awesome on offense this season, and Barrett will be the biggest reason why. He’s so big and skilled that he’s going to be able to create shots for himself and others pretty easily. He’s an expert at finishing through contact. Duke has Tre Jones to run point, but if he has to miss time for any reason, Barrett could run the team in a pinch.

Remember, Barrett went for a seemingly effortless 33 against Kentucky. His size and speed advantage will be more obvious against lesser opponents, and he absolutely torched the Wildcats. Barrett has a great shot to win the Naismith this season.

We knew Kansas’ frontcourt was going to be awesome this season, but there were some questions in the backcourt. The Jayhawks seemingly had a bunch of capable options to man those two spots, but none were proven.

Grimes (and Devon Dotson, who we’ll talk about next) were incredible against Michigan State. Grimes scored 21 points against the Spartans and made six of 10 3-pointers. The last part is key; Grimes was never touted as an ace shooter as a recruit…. but boy, did he look comfortable from distance in his college debut. These weren’t all wide-open looks. Grimes never flinched and stepped into his shots confidently. By the end of the game, he looked just as dangerous as Dedric Lawson and Udoka Azubuike.

He’s built well and has good speed and vision. If this is the Grimes we get all season, it’s going to be really hard to beat Kansas.

Grimes was the most impressive Kansas freshman guard on Tuesday, but Dotson was right behind him. Their games are similar, and while you never want your big men to be too redundant, redundancy is fine in the backcourt. The more speedy ball-handlers that can shoot, the better. Remember how much success the Jayhawks had the year Frank Mason started alongside Devonte’ Graham?

Dotson scored 16 points, notched three steals and made three 3-pointers against the Spartans. He was able to get into the teeth of the defense whenever he wanted and looked poised once he got there. The moment certainly didn’t look too big for him.

The Kansas backcourt looks like it could be a pleasant surprise. Considering the fact that the Jayhawks were ranked first in the preseason, these guys could have a historic year.

It’s crazy that Reddish is the third-best freshman on Duke right now. In some years, he’d be the best freshman in the country.

Reddish looks like he was born to play in this era of basketball. He’s a ridiculous athlete, is fluid, big, and can shoot. Reddish scored 22 points and had four steals against Kentucky.

MORE: Takeaways from the Champions Classic

Duke’s offense got a lot of publicity after its 118-point performance, and rightfully so. But we knew this team would score. Defense was the question, and Reddish looked like a terrorizing defensive player on Tuesday, capable of guarding all five positions.

That will be immensely valuable moving forward. He might not put up the same stats as Williamson and Barrett, but Reddish is a stud in every sense of the word.

He has such a well-rounded game. His array of floaters was on display on Tuesday, and the 6-6 wing combines bounciness with craft. Johnson was able to slither into the lane on several occasions and finish over athletic Duke defenders. While he wasn’t particularly disruptive on defense, he held his own. Johnson didn’t seem overwhelmed by the nuclear Duke attack.

He’s going to give the Wildcats nice lineup versatility. Johnson was a positive on an otherwise tough night for Kentucky.

We’ll go a little shorter on the next few guys because they didn’t play the type of competition that those above did.

MORE: Here are 10 players to watch in college basketball this season

Langford scored 19 points in his college debut against Chicago State, but what stood out was his 11 free-throw attempts. That’s a great sign for Indiana. Langford can stroke it, but the most efficient shots are still near the hoop. If he can get to the line five times per game or more, the Hoosiers will be better for it.

Porter was really impressive to watch in his college debut. USC desperately needed a wing scorer to pop this season, and Porter looks like he could fit the bill.

Porter looked like a poor man’s Barrett. He scored 15 points on just seven shot attempts and sank both of his 3-pointers. There’s a fluidity and calmness to his game that should translate against better opponents; this wasn’t just about physical dominance. Porter simply looks like he knows how to play.

The Pac-12 is wide open this season. The Trojans weren’t a popular pick to win it coming into the season, but they have the talent to do so. A Porter breakout season would certainly help.