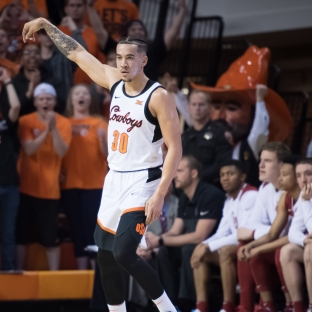 Oklahoma State downed No. 4 Oklahoma 83-81, despite freshman sensation Trae Young dropping 48 points for the Sooners. Kendall Smith nailed this clutch 3 in regulation to send the game to overtime for the Cowboys:

Heading to overtime in the Oklahoma at Oklahoma State showdown. Huge 3 from Kendall Smith sends it to OT pic.twitter.com/JkQxHVT6VK

The Pokes improved to 3-4 in conference play, while the Sooners fell to 4-3. Oklahoma State countered Young’s heroics with a team effort — Jeffrey Carroll scored 23 points, while Smith chipped in 20 and Tavarius Shine scored 16.

Oklahoma State is back in action on Tuesday at Texas Tech.