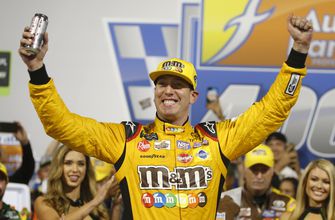 RICHMOND, Va. (AP) — Kyle Busch has been one of the last four contenders standing in each of the NASCAR Cup Series’ last three years, and now that he’s secured his spot in stage two of the playoffs, he’s approaching next week’s race on an unusual and foreign layout at Charlotte Motor Speedway with a devil-may-care attitude.

That could be trouble for others who need to perform to advance.

The elimination race will be run on a combination of Charlotte’s 2-mile oval and a road course in the infield. The “roval” is a layout that is narrow in spots and slick in others, one that vexed many teams even when they were just trying to practice on it.

“I don’t know if I’ve seen more talk about something than the roval, really,” Busch’s team owner, Joe Gibbs, said. “We’ve been talking about this thing. And I will say this: I think we wrecked four cars, didn’t we, in practice getting ready for it? I finally said, ‘Nobody else goes over there.’ I’m tired of wrecking stuff.”

Kevin Harvick, who along with Busch shares the series high with seven victories this year, said he’s “terrified of next week, to tell you the truth, just because there’s so many unknowns.” Despite being third in the points race after Richmond, Harvick still hasn’t clinched a spot in stage two, but Busch doesn’t have that problem.

He plans to approach it just like any other race, with designs on winning.

“I think you can drive it differently because you can go force the issue sometimes and try to get a win or get a good finish versus just kind of having to be stressed about it the whole day and on your toes about it the whole day,” he said after notching his 50th career victory Saturday night at Richmond.

Busch and Brad Keselowski have both clinched spots in the next round with playoff victories, and points leader Martin Truex Jr. also punched his ticket by winning the first two stages at Richmond, but Busch understands why Harvick and anyone else needing a good showing at Charlotte is concerned about what awaits there.

“I think everybody is just nervous because it’s very slick,” Busch said of the roval, which has never hosted a Cup-level race. “I don’t know why it’s so slick. Like when we go to Sonoma, Sonoma doesn’t feel this bad. When you go to the roval, though, you’re just on edge the entire time. It feels like ice. You’re never comfortable.”

And mistakes, or being in the wrong place at the wrong time, can be especially unforgiving.

“If you get off course, you’re into a tire barrier, you’re into a wall, you’re hitting someone or something right away. There’s no runoff,” Busch said. “That’s why I think everybody is so (worried) about it is just the tightness of the course. But it’s the same for all of us.”

Unless, like Busch’s teammate, Denny Hamlin, or seven-time champion Jimmie Johnson, you need a strong performance to stay in the title hunt.

Johnson, who claimed his seventh title in 2016, joked that he would “crash all those guys in front of me” to advance, then said survival is key.

“It’s been one of those years,” he said, “but we are going to go down swinging to the bitter end.”