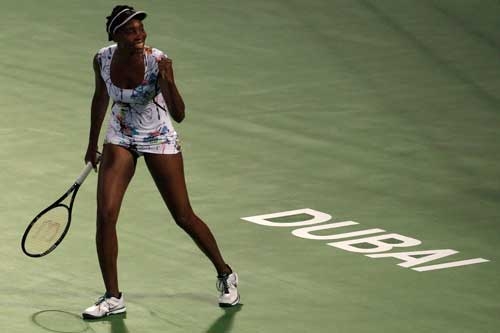 Venus Williams comeback: Williams' victory at Dubai an indication that she is ready to rejoin women's tennis elite [VIDEO]


Venus Williams comeback: Williams’ victory at Dubai an indication that she is ready to rejoin women’s tennis elite [VIDEO]

It was career title No. 45 and not even close to a Grand Slam championship. And it may have been the sweetest win in her career.

Venus Williams claimed her first tournament victory in two years with a relatively easy 6-3, 6-0 win over Alize Cornet to capture the Dubai Duty Free Tennis Championship. Williams had not played the Dubai tournament since 2010, but she leaves having extended her winning streak there to 15 matches.

WTATennis.com quoted the 33-year-old Williams as saying, “I have had a good week. Everything is falling together pretty much, is all I can say.”

Williams, the owner of seven Grand Slam titles, was asked whether she felt she was nearing a level of that would allow her to compete for majors again.

“Winning all those Grand Slam titles, playing deep and getting to the final so many times, those are amazing accomplishments. It takes a lot of nerve and mental prowess. I’d like to think I’m on that path.

“But I’m not looking to do anything I did in the past, because I already did that. I’m looking to improve and be a better, smarter Venus. This week is obviously a step – every week for me is a step.”

The past few months have been major steps for Venus, who was diagnosed with Sjogren’s syndrome, a disease that causes joint pain, swelling, numbness and fatigue, in 2011.

After reaching the finals of the ABS Classic in Auckland, New Zealand in December, her win in Dubai is another clear indication that she is getting to be a “better, smarter Venus” in managing her disease and resuscitating her tennis career.

She reportedly underwent a lifestyle change that included a new diet that has helped her regain her championship tennis form.

When asked directly how she has become healthier, Williams said, “How? I pray and try a million different things all the time. That’s pretty much what I do.”

“Like I was saying earlier in the week, I couldn’t even come here the last few years. So just to be able to be here and compete was the first thing that made me so happy, and then obviously to play well, win the title and have this wonderful streak here is definitely an accomplishment.”