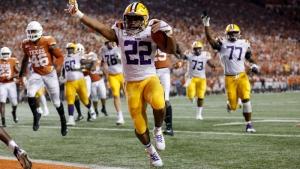 
We’re only in Week 3 of the 2019 college football season, so there are still 52 undefeated teams. Expect that number to start plummeting the next few weeks.

Going into Week 3, the MAC is the only conference without any unbeaten teams. The Big Ten has the most with 10.

There are still 52 teams without a loss this season. Here they all are, starting with teams ranked in the AP Poll Top 25.

It’s possible the Tigers and QB Trevor Lawrence might not face a ranked team again until the postseason. The defending national champions beat ranked Texas A&M by two touchdowns last week and now head to Syracuse. The Orange were No. 21, but Syracuse lost to newly ranked Maryland, 63-20. However, the Tigers still have other road games against North Carolina, NC State and rival South Carolina.

The Crimson Tide open up SEC play against South Carolina in Week 3. Through two games, Alabama hasn’t been threatened. The Tide also won’t play a currently ranked team until Oct. 12 at Texas A&M. In Week 2, Tua Tagovailoa passed for 227 yards and three touchdowns in the rout of New Mexico State.

The Bulldogs shouldn’t have much trouble in Week 3, though Arkansas State is an annual Sun Belt Conference contender. However, Week 4’s home date against fellow top-10 Notre Dame looms. Two seasons ago, UGA won at Notre Dame, 20-19, in what turned out to be a College Football Playoff appearance season and a No. 2 finish in the polls.

The Tigers have always had the defense to compete. But now it seems LSU might have a potent offense, too. Joe Burrow passed for 471 yards and four touchdowns at then-No. 9 Texas to lead the Tigers to the huge 45-38 win. LSU next plays a ranked foe on Oct. 12: Florida. The Gators beat LSU last season, 27-19.

Another season, another ridiculously potent Sooners attack. Through two games, Jalen Hurts has 591 passing yards and six touchdowns and 223 rushing yards and three touchdowns. Could he be Oklahoma’s third consecutive Heisman Trophy winner? He’ll have a chance to make a big statement when OU plays rival Texas on Oct. 12.

The Buckeyes dominated Cincinnati but dropped in the polls thanks to LSU’s win at Texas. But the Buckeyes have looked strong through two games behind QB Justin Fields. OSU has five games left on the schedule against teams in the AP Poll: Michigan State, Wisconsin, Maryland, Penn State and Michigan. But that also means a bunch of other ranked teams still have to play the Buckeyes.

TOP 25 RANKINGS: Breaking down the new AP Poll for Week 3

The Irish have what should be a non-dramatic win ahead with New Mexico in Week 3. That’s the assumed warmup before Notre Dame travels to Athens for a night game against Georgia. It won’t get much easier after that, either. Notre Dame then gets a visit from No. 25 Virginia.

Bo Nix led the dramatic win against Oregon in Week 1. The Tigers then beat a possibly underrated Tulane in Week 2. If there’s one area of concern for Nix, it’s his accuracy. Through two games, Nix is completing 47.1 percent of his passes.

It’s about to get a little fun in the SEC, with the Gators getting two SEC East rivals in consecutive weeks. First up is Kentucky, which halted its losing streak at 31 to UF in 2018. Then comes struggling Tennessee.

Michigan barely remained on the undefeated list, needing a long missed field goal in the final seconds and then two overtimes to beat Army. The offense has struggled, but the Wolverines have an extra week to prepare for Wisconsin on Sept. 14 — though the Badgers also have an off week in Week 3.

As early season Pac-12 title contenders Oregon and Washington fell, Utah has moved up toward the top 10 of the polls. The Utes allowed 159 total rush yards in their first two games and have FCS foe Idaho State up this week. After that, Utah has to travel to Southern California for a Friday night game.

After trailing 10-7 at the half, Penn State took over and routed MAC Buffalo. Now the schedule really starts to pick up. In-state rival Pitt is next before Big Ten play begins. And it’s a rough stretch: at No. 21 Maryland, vs. Purdue, at No. 19 Iowa, vs. No. 10 Michigan and at No. 18 Michigan State. Big tests coming up for first-year starting QB Sean Clifford.

No team has probably looked as outright impressive the first two weeks, at least by the final scores. The Badgers are outscoring teams 110-0 this young season and now have off until Michigan comes for a Sept. 14 game. Jonathan Taylor has scored eight touchdowns already, though the play of QB Jack Coan might be more important. After struggling in the air last season, Wisconsin might have found an answer in Coan: 564 passing yards, five touchdowns, no interceptions after two games.

UCF is the highest ranked Group of 5 team as it looks to play in a New Year’s Six game for the third consecutive season. These next two games will be telling. Stanford might have lost to USC last week, but a visit from a Power 5 school still matters as UCF tries to impress against a big-name foe. The ACC’s Pitt is next, though, the Knights beat the Panthers by 31 last season.

HIGHLIGHTS from our 48-14 W at FAU 👇 pic.twitter.com/Q0IDVybAhD

A pair of 2-0 teams battle in East Lansing this week, as Arizona State is in town. Last season, Arizona State’s Brandon Ruiz made a 28-yard field goal on the last play of the game to upset the then-No. 15 Spartans, 16-13. MSU didn’t trail until the final whistle.

ESPN’s College GameDay is at Iowa’s next game, with the Hawkeyes meeting rival Iowa State. It’s the first time the show is going to Ames, Iowa. The Hawkeyes and Cyclones have met every year since 1977. Iowa has also won four in a row in the series.

Despite losing 4,700-yard passer Gardner Minshew, Washington State continues to look good on offense. Through two games, Anthony Gordon is 60-for-74 passing for 884 yards, nine touchdowns and only one interception. The Cougars get the national spotlight to themselves this week, as they play Houston on Friday night.

The Terrapins are ranked for the first time since 2013 after routing Syracuse by 43. Maryland rolled up 354 rushing yards and also got 296 passing yards from Josh Jackson. But how will Maryland play with the increased attention that comes from the fast start? It has to travel to Temple this week. The Owls beat Maryland last season by 21.

“I think the story of the year, so far, is Maryland.”

After rallying to stun Florida State, the Broncos had a tough time putting away Marshall in their home opener, 14-7. FCS Portland State should be an easier opponent — Boise State hasn’t lost to the Vikings since 1992 (when BSU was I-AA). True freshman Hank Bachmeier has 689 passing yards after only two games.

Freshman QB Kedon Slovis couldn’t have asked for a better first career start. Against No. 23 Stanford, Slovis was 28-for-33 for 377 passing yards, three touchdowns and no interceptions. Now that the Trojans are ranked and Slovis is a known asset, things might be getting a little more tougher. BYU, fresh off winning at Tennessee, now gets the Trojans.

The Cavaliers have looked every part of the ACC Coastal contender (and possibly favorite) through two games. Florida State isn’t the Florida State of old, but this Saturday’s night game is still a huge test for Virginia.

Here are the remaining undefeated teams that aren’t ranked in the AP Poll:

Going into Week 3, the Big Ten had 10 teams without a loss. For purposes of this story, Independents are included together.