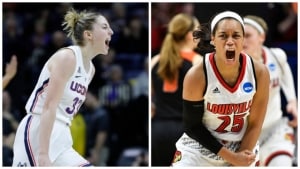 The Louisville and UConn women’s basketball teams are set for a huge nonconference game on Thursday, Jan. 31 that will have rankings and NCAA tournament seeding ramifications. Below, find the game time, TV channel, prediction and preview information.

Louisville will host UConn from the KFC Yum! Center at 7 p.m. ET on Thursday, Jan. 31. The game can be watched on ESPN.

That only Louisville win came before UConn’s and head coach Geno Auriemma’s 11 national titles. But it also came well before Jeff Waltz guided the Cardinals to three Final Fours and two title game appearances (losing both to UConn).

UConn (18-1, 7-0 American Athletic Conference) has won its last seven since falling to now No. 1 Baylor on Jan. 3, 68-57. Katie Lou Samuelson and Napheesa Collier both average more than 18 points per game. Earlier this month, Samuelson reached 3,000 points in her career, becoming only the 10th Connecticut player to reach the milestone.

On paper, UConn has been more statistically dominant. But Louisville’s Durr has the ability to take over a game in crunch time, should the Cardinals be in position for a late-winner. That’s how UConn lost in the NCAA tournament in each of the last two years to Mississippi State and Notre Dame.

Durr rested in Sunday’s 70-42 win against Pitt, so fatigue shouldn’t be a factor. But Louisville will have to do better in keeping possession of the ball. The Cardinals had 18 turnovers against the Panthers, so unless Louisville can hit shots at a ridiculously high rate, it must protect the ball.

Thursday night, there is only ☝️ place to be …

Louisville will have the home edge, giving the Cardinals some added confidence if it’s close late. However, UConn might be just a little too much to conquer.

But if things break a certain way, these ex-Big East foes might meet later this season anyway in the Final Four, or even for the national title. So this game might only be Part I. At least for now, UConn is the slightly better team.