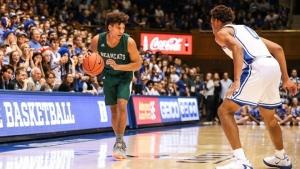 
To say that the Northwest Missouri State men’s basketball team is on fire is a bit of an understatement. The Bearcats are walking on the sun, opening the season with a sweep through the Small College Basketball Hall of Fame Classic. That extended the defending national champions’ winning streak to 40 games.

Now, the Bearcats have some work to do to break records. But 40 games is impressive, and certainly time to take notice. Let’s see how the Northwest Missouri State streak matches up in college basketball history, how we got here, and the toughest challenges remaining on their 2019-20 schedule.

In order for Northwest Missouri State to tie Winona State’s record of 57 consecutive wins, the Bearcats would have to play perfectly through their Jan. 25 showdown with Fort Hays State.

PLAYER OF THE YEAR WATCHLIST: 15 players to keep your eyes on

Northwest Missouri State win streak: How we got here

The Bearcats’ last loss was March 10, 2018, when they fell 60-50 to Minnesota State in the first round of the NCAA DII tournament. It’s been all Ws since.

DII vs. DI: How Northwest Missouri nearly beat No. 4 Duke in college basketball

Northwest Missouri State opened 2018 at the Small College Basketball Hall of Fame Classic with a bunch of new faces in the starting lineup and took down the 2018 runners-up Northern State and defending champion Ferris State in two days time.

That started a trend. With the Bearcats’ most recent sweep in the SCB Hall of Fame Classic — both against top 25 competition — they have won 34 straight games on neutral courts dating back to the 2015-16 season, including all three last season in Evansville, Indiana, to capture their second national championship in three years.

Some other numbers, you ask? Entering the 2019-20 season, Northwest Missouri State has won 23-consecutive Mid-America Intercollegiate Athletics Association games, 17 straight at home and 15 on the road. The Bearcats hope those numbers continue to grow.

The Bearcats’ 2019-20 schedule is somewhat favorable, at least to start. After opening in St. Joseph on back-to-back weekends, the Bearcats schedule starts with three consecutive home games before hitting the road for their conference opener Dec. 5 in Lincoln, Missouri. Lincoln was one of five teams with double-digit wins in the MIAA in 2018.

Jan. 11 will pose a big test against a Washburn team receiving votes, and the game that could tie the record at 57 on Jan. 25 is against Fort Hays State, also receiving votes in the preseason poll. Of course, the Bearcats stiffest competition in the MIAA should be from Missouri Southern. The Bearcats don’t play the Lions until Feb. 13 and should they survive that still undefeated, there’s a showdown between the two a mere week later.

Here’s the complete 2019-20 schedule for the Bearcats: