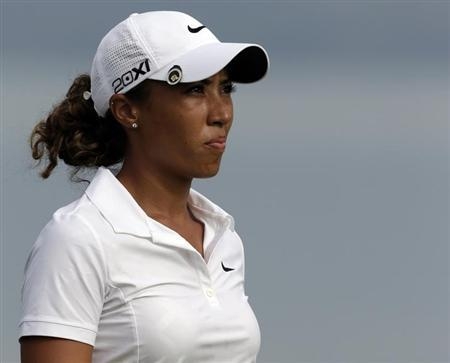 Tiger Woods Family Life: Tiger's Niece, Cheyenne Woods One Round Away From Biggest Win of Her Golf Career [VIDEO]


Tiger Woods Family Life: Tiger’s Niece, Cheyenne Woods One Round Away From Biggest Win of Her Golf Career [VIDEO]

Cheyenne Woods is hopeful to be seen as a professional, not just Tiger Woods’ niece. (Photo : Reuters)

Woods again is on top of a golf tournament, but this saga has a strange twist. Tiger isn’t the one participating in the event.

Woods shot a 2-under 71 Saturday for a three-day total of 12-under 207 at the Royal Pines Resort. Bregman shot a 1-under 72 and is second at 11 under. Minjee Lee, the 17-year-old Australian amateur champion is third at 10 under after shooting a 3-under 69 in the third round.

Woods said she was nervous, and it showed as she mixed seven birdies with five bogeys during her third round. However, she birdied four of her final five holes to grab sole possession of first place and put in position to win what would be the biggest tournament of her career.

”I’m proud with how I was able to fight through today,” she said, as reported by the Sydney Morning Herald. ”Tomorrow’s just going to be another day to get through. It would be a huge accomplishment [to win]. Playing well this week, I’m already happy with how it’s been going but to have that win would just be the cherry on top. Especially to start out my year.”

Woods has one professional victory, the 2012 SunCoast Ladies Series event at the LPGA International. Her uncle took the week of this week from the PGA Tour, sitting out the AT&T Pebble Beach National Pro-Am.

“It comes down to the fire in your belly and fighting for every shot especially on the final day,” Cheyenne Woods said, according to the Courier Mail.