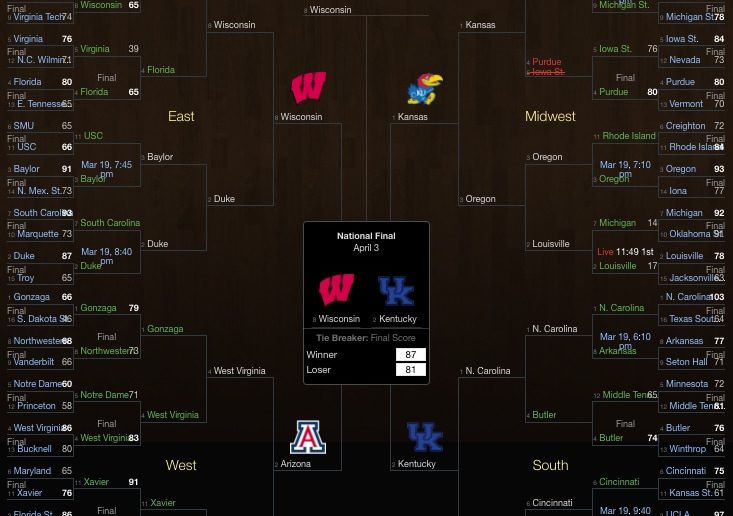 If you’re wondering about the prospect of a NCAA bracket that is perfect through the entire run of the NCAA March Madness tournament, consider this: It’s hard enough to get past the first two days without a bust. But it’s not impossible. In 2018, no perfect bracket last through Friday night, thanks to the historic 16-1 upset of UMBC over Virginia.

In 2017, we saw an incredible 39 games picked to start the tournament, a number we believe to be the highest recorded.

Here’s what happened the year of the perfect bracket. The relative predictability of the 2017 tournament led to an abnormally high number of perfect brackets surviving the first round. We tracked tens of millions of them, at six major online games, including the Capital One March Madness Bracket Challenge here at NCAA.com.

At NCAA.com, Bleacher Report, CBS, ESPN, Fox Sports and Yahoo!, one bracket remained perfect through 39 games before busting in the final matchup on the third full night of action (Saturday night), when Purdue beat Iowa State. That’s the longest known recorded and verified streak (that we could find) to open a tournament.

Yahoo.com
This Yahoo bracket stayed perfect the longest in 2017, through 39 correct games. It finally busted when Purdue beat Iowa State.

Before 2017, the longest perfect bracket streak we had tracked was 36, according to Yahoo! Sports. In 2014, Brad Binder went 36-for-36 to start the tournament.

In 2016, the longest anyone went was 25 games to start the tournament. That’s well below the 2015 tournament’s reported (and verified) best, when one person in the ESPN online bracket game picked the first 34 games correctly, according to a story by ESPN senior writer Darren Rovell. ESPN said in 2016 that its 2015 bracket was the best start to a tournament it had on record in 18 years of its game. Yahoo! Sports reported last year that Binder’s bracket was the only time it had a perfect bracket go into the second round in its 18-plus years of hosting a game. In 2017, Yahoo! reported 37 perfect first-round brackets.

So 39 is the record we’re going with. With more than three decades of online and paper brackets to sift through — the current format has existed since 1985 — and with somewhere between an estimated 60 million to 100 million brackets filled out every year, we acknowledge there is a significant chance that someone, somewhere has done better.  Determining an official record is made even more difficult by the fact that online games only recently have begun comprehensive record-keeping.

We could find no verified brackets that have been perfect into the Sweet 16 (through 48 games) at all. There was a widely reported instance of a bracket that was perfect through two rounds in 2010, but there was no way to verify the bracket’s authenticity. It had been entered in an online game where picks could be altered between rounds according to a Deadspin report at the time.