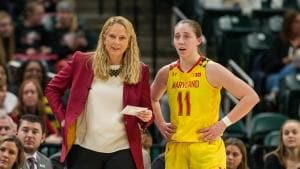 
No team is the same year over year.

So while four of the more dominant teams this season reached the Final Four, while Oregon, Notre Dame, Baylor and UConn backed up their strong regular seasons with deep NCAA tournament runs, there’s no guarantee they’ll return next year. In fact, some teams that failed to advance to their region’s final could take their place.

BRACKET: Relive the wild twists and turns of the 2019 NCAA tournament

Skeptical? Well, Baylor just did it. The 2019 champion Bears lost against Oregon State in a regional semifinal game last tournament, a 2-seed bounced by a 6-seed. And then they won it all.

So don’t sleep on these five teams come March 2020.

Dancin’ on ’em 😌@ChennedyCarter joins @De11eDonne as the only players to lead the NCAA Tournament in scoring average in back-to-back seasons. She is the first player in history to achieve this feat in her freshman and sophomore seasons.#aggieATMosphere #GigEm pic.twitter.com/bqulcWq8Nb

Texas A&M (26-8) saw its 2019 NCAA tournament run end with a regional semifinal loss against eventual national runner-up Notre Dame. The 4-seed Aggies only lost to the 1-seed Fighting Irish by seven, though. And next year? They’ll return all but two seniors who played sparingly.

Every player who started a game during the 2018-19 season will be back. The top eight scorers and assist leaders will return. 94.3 percent of the Aggies’ rebounds will be back. This is a team that averaged 69.8 points per game, shot 43.6 percent from the field and out-rebounded opponents by an average margin of 6.5 boards per game. This is a team that also had a -0.4 average turnover margin and only made 70.1 percent of its free throws. And it’s only going to get better.

Leading the Bears will be guard Chennedy Carter, who was a first-team All-SEC selection this season as a sophomore.

In the final USA Today Coaches’ Poll, we check in at #17. This is Iowa State’s highest end of season ranking since 2009-10!#Cyclones #MadeForThis pic.twitter.com/qkFETlmjGf

Iowa State (26-9) suffered what was arguably the biggest upset of the 2019 NCAA tournament when it lost against 11-seed Missouri State in the second round. The 3-seed Cyclones were on a collision course with the 2-seed Stanford Cardinals, and they never had a chance to pull off an upset of their own.

But they’ll be better for it next season.

Iowa State loses its top scorer in Bridget Carleton, the Big 12 Player of the Year. It also loses key pieces in Alexa Middleton, an All-Big 12 honorable mention, Meredith Burkhall and Ines Nezerwa. But the Cyclones also relied heavily on younger players during the season.

Kristin Scott earned All-Big 12 Second Team honors as a sophomore. Ashley Joens was named to the conference’s All-Freshman Team. Three of the top five scorers — Scott, Joens and Madison Wise — will be back. They just need to step up, lead and replace the production lost. Watch out when they do. That gap between the Cyclones and Bears may not be too wide.

The best #TBT there is!

Maryland (29-5) also suffered a loss in the second round. The 3-seed Terrapins fell to 6-seed UCLA. But the Big Ten regular season champions return next season with all but one senior role player back.

Big Ten Coach of the Year Brenda Frese will have her five leading scorers back, including unanimous first team All-Big Ten selection Kaila Charles’ 17 points per game. She’ll have her leading 3-point threat back in Taylor Mikesell, who was chosen by Big Ten coaches as the conference’s top freshman. And Stephanie Jones, going into her senior year, and Shakira Austin, who led the team in rebounding as a freshman, will only get better.

Syracuse (25-9) couldn’t get out of the second round either. The 3-seed Orange lost to 6-seed South Dakota State and had to watch SDSU challenge 2-seed Oregon instead. Next year, that won’t happen.

See, Syracuse has the right mix of talented youth and experience. Tiana Mangakahia was a consensus first-team All-ACC member as a junior and led the team in points and assists per game with 16.9 and 8.4, respectively. She also led the team in steals and free throws and was second in rebounding. Maeva Djaldi-Tabdi was a consensus freshman team All-ACC member. She was fourth in scoring for Syracuse and third in rebounding.

And there’s a ton of talent elsewhere on a roster that loses a handful of seniors, including second-leading scorer Miranda Drummond, but will be no less formidable next season. They’re going to make up the gap between them and the likes of Louisville and Notre Dame.

What a season it was! We finished 9th in the final USA Today Coaches Poll, which is our best ranking to end a season since 1991!

NC State (28-6) was never able to dig out of the hole it had after the first half against 2-seed Iowa, and lost to the Hawkeyes in this year’s regional semifinal. But the 3-seed Wolfpack showed plenty of potential all season long and have a shot next season at realizing that potential.

Kiara Leslie and her team-leading 15.9 points per game are gone. She was first team All-ACC and a member of the All-ACC Defensive Team. But NC State will have Elissa Cunane, Grace Hunter, Aislinn Konig and more all back.

IONESCU RETURNS: Oregon will have its star for her senior season

Cunane led the team in blocks and averaged 13.6 points and 6.3 rebounds per game. She was on the All-ACC Freshman Team. Hunter is the team’s leading returning scorer at 14.6 points per game and also averaged 6.9 rebounds per game before a season-ending injury in January. Konig was a 40.1 percent 3-point shooter with nearly 100 made 3s.

Don’t let this team get on a roll as the 2020 NCAA tournament tips off.