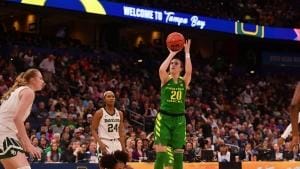 
It’s never too early to look ahead to next season and wonder who might step up as the frontrunner for the 2020 Naismith Player of the Year award.

Iowa’s Megan Gustafson won the award this year after a stellar senior season that saw her lead the nation in scoring with 27.8 points per game, finish third in rebounding with 13.4 per game and propel the Hawkeyes (29-7) to a regional final appearance. But she’s off to start her WNBA career now. There’s no chance for the first repeat winner since UConn’s Breanna Stewart won the award three years in a row from 2014-16.

So who’s going to win her first? Oregon and UConn both have a point guard who could. Maryland has a star worth following. And Baylor and Miami (Fl.) each have a post player poised to once again dominate inside. Let’s break down why the Ducks’ Sabrina Ionescu, Huskies’ Crystal Dangerfield, Terrapins’ Kaila Charles, Bears’ Lauren Cox and Hurricanes’ Beatrice Mompremier could all follow in Gustafson’s footsteps.

Ionescu was the lone junior among the four finalists for this year’s Naismith Player of the Year award. She won the Nancy Lieberman Point Guard of the Year Award. She led the Ducks (33-5) to the Final Four only to lose to eventual champion Baylor. If there’s conversation debating who might be a clear-cut favorite for the 2020 award, she has to be in it.

Ionescu is now a two-time Nancy Lieberman Point Guard of the Year Award winner and two-time Pac-12 Player of the Year. She averaged 19.9 points, 8.2 assists and 7.4 rebounds per game this season and owns career averages of 18.2 points, 7.3 assists and 6.9 rebounds per game. It’s hard to see anyone breaking her NCAA record for triple doubles, which she’ll likely add to next year.

IONESCU RETURNS: Oregon’s star will be back for her senior season

She may be the focus of every opponent’s game plan. But that’s OK. Ionescu knows it and she’ll be prepared when the 2019-20 season tips off.

Thank you for taking over Tampa with us, #UConnNation! Take a look back at the #WFinalFour through our lens.

Dangerfield also helped lead a team to the Final Four. Her Huskies (35-3) lost to eventual national runner-up Notre Dame. And all the while, on a UConn team that had two top-six picks in the 2019 WNBA Draft, she averaged 13.4 points, 5.9 assists and 3.3 rebounds per game and was a finalist for the Nancy Lieberman Point Guard of the Year Award.

UConn will look to her as one of its leaders next season. Of the Huskies returning she leads them in points, assists and steals per game. So it’s more than likely her numbers will improve and she’ll be in a better spot to move past Ionescu. This season was only her second as a regular starter and she was First Team All-Conference.

Another day, another All-America honor!

Charles was a finalist for the Cheryl Miller Small Forward of the Year Award among three eventual WNBA draft picks. She finished her junior season with an average of 17 points, 6.7 rebounds and 2.3 assists per game. She helped the Terrapins (29-5) to a Big Ten regular season title and a 3-seed in the NCAA tournament.

And now she has a chance to take a critical step forward. The unanimous first team All-Big Ten selection is in a spot where she could follow Gustafson’s lead and win Big Ten Player of the Year and Naismith Player of the Year. Charles has a wealth of talent with her on the Terrapins roster that’ll put her in a position to succeed, and the reigning Big Ten Coach of the Year will be there to guide her.

Baylor (37-1) won the national championship for a lot of reasons. There is Big 12 Coach of the Year Kim Mulkey. There are two WNBA draft picks in Kalani Brown, a Lisa Leslie Center of the Year Award finalist, and Chloe Jackson. And without a doubt, there is Cox.

Cox averaged 13 points, 8.3 rebounds and 2.6 blocks per game as a junior. She finished as a finalist for the Katrina McClain Power Forward of the Year Award, made first team All-Big 12 and won her second-straight Big 12 Defensive Player of the Year award. There may not be another interior presence like her in the country.

For the first time since 2012, @CanesWBB has an AP All-American! pic.twitter.com/kKZfO18L51

The Hurricanes (25-9) proved to be a dangerous team all season long. They beat quality opponents such as Marquette, Louisville and Notre Dame. And most of their losses only came by single digits. Mompremier was a significant reason why.

The Miami native averaged 16.7 points and 12.2 rebounds per game, recorded 25 double-doubles and was first team All-ACC. She hit more than 50 percent of her shots and took all but three of her 422 attempts inside the 3-point line. Just think about how tough of an opponent she can become with a little more range and a better percentage at the free-throw line.

BAYLOR WINS: How the Bears became the 2019 national champions

When the Hurricanes step onto the court again for the 2019-20 season, she’ll be the lone returning finalist of those in the running for the Lisa Leslie Center of the Year Award.