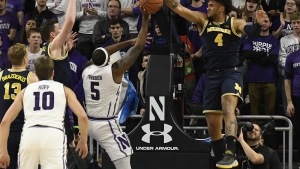 Behold, the endless variety and infinite diversity of college basketball storylines. How does the sport remind us of a big smorgasbord, all-you-can-eat line? Look at one night. Just one night. Tuesday night.

In Lawrence, Kansas got zero points – nada – from second and third leading scorers Lagerald Vick and Udoka Azubuike, the latter going out with an ankle injury. The Jayhawks struggled early but finally put away Wofford with a 27-0 run, 72-47, meaning Bill Self is now 163-1 when holding the opponent under 60. Kansas remains unbeaten but the masses have been a little tense. The Jayhawks just slid by two overtime victories.

MORE: A fact about each of CBB’s remaining undefeated teams

In Evanston, a Michigan team that had steamrolled its first eight opponents by at least 17 points, blew a 15-point lead against Northwestern and barely escaped 62-60. Welcome to life on the road in the Big Ten. “We survived – I don’t know how,” John Beilein said. Poor Northwestern. The Wildcats played two Big Ten games in four days – at Indiana the other – and lost both by two points.

In Elon, N.C., Furman took the floor for the first time in history as a member of the Associated Press top-25. The 9-0 Paladins beat Elon 98-77, when Alex Hunter scored all of his 18 points after halftime. But they understand their margin for error in the polls. “We know the next time we lose, we’re out,” coach Bob Richey said.

In State College, Pa., Penn State roared to a 9-0 head start against Indiana. Then the Nittany Lions lost 64-62, partly because they missed 15 of 26 free throws and more than a dozen layups. “I wish I had some clever answer for you,” coach Pat Chambers told reporters afterward. “I don’t.” Penn State is 4-4, with the four defeats by a combined 14 points.

In Boston, the Boston College Eagles pulled out white uniforms with Eagles in script for the first time since the 1961-62 season. So much for good luck from a wardrobe change. They lost 100-95 in overtime to Providence.

Beware the brutes from the Ivy League. In Philadelphia, freshman Michael Wang scored 23 points to lead Penn past Miami 89-75. Three days earlier, Miami lost to Yale. For being such a mighty league, the ACC has taken some curious early season defeats: IUPUI over Boston College, Houston Baptist over Wake Forest, Niagara over Pittsburgh, Radford over Notre Dame. Clemson went 0-2 against the state of Nebraska – losing to both Creighton and the Cornhuskers – and now this 1-2 punch on Miami by the Ivy League.

In Bangor, Maine, Andrew Fleming had a career high of 29 points and four different Black Bears combined to go 8-for-8 from the line in the final minute of the second overtime as they beat Fordham 75-68. It ended a 15-game losing streak, and made a winner of Richard Barron, who used to be the Maine women’s coach, moved to the men’s team, and started 0-8.

Another new coach did not have a breakthrough in Philadelphia. Ashley Howard was Jay Wright’s right hand man at Villanova, so he spent last April sharing in a national championship. But that was yesterday. Now he’s the head coach at La Salle, and the Explorers lost to Bucknell 92-79 to start 0-9 – one of five teams in the nation still winless.

In Cincinnati, two teams who shared the same arena last season this time shared the same floor. Cincinnati played its home games across the river at Northern Kentucky in 2017-18 while its own arena was being refurbished. Part of the deal is they would resume a series this season, having not played in three decades. Looked like a good match, with Cincinnati at 7-1 and Northern Kentucky at 8-1. It didn’t go well for Northern Kentucky, 78-65. “I thought we’d come in here and compete, that we’d give them a game,” coach John Brannen said. “I’m disappointed we didn’t.”

In New York, Florida ran past West Virginia 66-56. Bob Huggins rarely takes defeat gently, and this was no exception. He had some dire words to the media for the future playing time of some of his Mountaineers. “I think I can fix it. I’ve fixed it before.  And when I can’t fix it, I cut it out.”

In Valparaiso, Ind., Brandan Kamga’s shot with one-second left made High Point a 55-53 winner. What the buzzer-beater giveth, the buzzer-beater can also taketh away. Three days earlier, High Point was stunned by a walk-off Eastern Kentucky 3-pointer after blowing a 23-point lead. Much more of that, and Tubby Smith will have more gray hair than he does now.
RELATED: Full college hoops scoreboard

In Tuscaloosa, Alabama blew a 22-point lead and was beaten in the last second by Georgia State and Malik Benlevi’s 3-pointer. In 19 minutes, the Tide went from 55-33 ahead to losing 83-80. Oh well, it’s till football season. Georgia State beat Georgia earlier, making this the first time in 18 years it had two wins over power-5 league teams in the same season.

In Columbia, Mo., the Tigers rolled past UT Arlington 65-45. The road is long and hard for the Mavericks, who lost their top nine scorers from last season and didn’t start a player taller than 6-5 against Missouri. They’re 3-6, having played at Indiana, Arkansas and Missouri. Ahead are trips to Gonzaga and Texas. Whew boy.

In Las Cruces, New Mexico State looked like a semi barreling down the interstate, as it flattened its I-25 cousins from New Mexico 100-65. That makes Chris Jans 4-0 against his in-state rival, by an average of more than 15 points a game. Maybe he couldn’t be governor of New Mexico, but he could be mayor of Las Cruces.

And finally, in Nashville, the Battle of the Boulevard added yet another scoop of drama. Caleb Hollander’s basket with 4.9 seconds left sent Belmont over Lipscomb 76-74. The two schools are on the same street, barely two miles apart, and are often even closer on the scoreboard. Belmont won an earlier meeting this season 87-83, and two years ago beat Lipscomb twice in the final seconds. Might be the best rivalry much of the nation doesn’t know.

It’s not March, but that’s a good chunk of madness, for one night in early December.