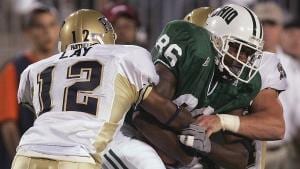 
The longest college football overtime game — five of them actually — spanned seven overtimes and kept the scoreboard operator busy putting points up on the board.

But what have the shortest overtime games been?

Theoretically, the shortest possible overtime game can be one play. It would require that the defense score a touchdown on the first play of overtime.

The shortest possible overtime session in which both teams have possession of the ball is two plays — a first-play touchdown by one team, followed by a turnover by the other team on its first play (or vice versa).

And that two-play overtime scenario is exactly what twice sits in the record books as the shortest overtime games in college football history.

In 2002, Louisville took down Florida State on the second play of overtime, and in 2003, Georgia Tech picked up a win in the same fashion against Vanderbilt.

One other game has gone three plays into overtime. Ohio kept its offense on the sideline in 2005 when it scored a defensive touchdown on the third play of overtime against Pitt.

Here’s a closer look at each game:

As the remnants of Tropical Storm Isidore provided a steady downpour of rain throughout the day in Louisville, the Cardinals scored one of the biggest upsets of 2002 against Florida State.

The overtime unfolded with Seminoles’ QB Chris Rix being intercepted by Anthony Floyd near the goal line on the first play of overtime.

Louisville running back Henry Miller then broke free on the left side on the very next play to find the end zone and send the Cardinal faithful rushing onto the field.

HIGH SCORES: These are the highest-scoring football games across all NCAA divisions

Georgia Tech led early, but needed its defense late to pull off an overtime win in Nashville.

Tied at 17-17, James Butler came up big for the Yellow Jackets on the last play of regulation. His block of a 44-yard field goal attempt by Tolga Ertugrul sent the game into what ended up being a very quick overtime.

Georgia Tech quarterback Reggie Ball flawlessly executed a naked bootleg run and leapt into the end zone on the first play of overtime to give the Yellow Jackets the early advantage.

On the very next play, it was Butler delivering in the clutch again with an interception to seal the win for Georgia Tech.

The Bobcats hadn’t had a nationally televised game since 1969 and only had six winning seasons over the previous 35 years. But on this September night in 2005, the fans in Athens had a big reason to cheer.

Preseason ranked No. 23 Pitt came into the game as heavy favorites with first-year coach Dave Wannstedt at the helm and quieted the crowd early as LaRod Stephens returned the opening kickoff 95 yards for a touchdown.

But Ohio held strong and took the halftime lead 10-7, thanks in part to a Dion Byrum interception return for a touchdown.

Pitt’s Josh Cummings made a 27-yard field goal with seven seconds left to send the game to overtime.

That’s when Byrum struck again, intercepting a pass on the third play of overtime and returning it for a touchdown to give Ohio one of its biggest wins in program history.