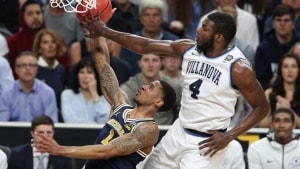 The November college basketball games that will matter the most


Joe Boozell has been a college basketball writer for NCAA.com since 2015. His work has also appeared in Bleacher Report, FOXSports.com and NBA.com. Joe’s claim to fame since joining NCAA.com: he’s predicted the correct national championship game twice… and picked the wrong winner both times. Growing up, Joe squared off against both Anthony Davis and Frank Kaminsky in the Chicagoland basketball scene. You can imagine how that went.