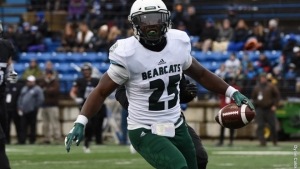 The first round of the DII Football Championship is in the books. Here's what we learned

Welcome to the 2018 DII Football Championship. Or should we call it Upset City?

The first round of the tournament went just as expected. That is to say, it was completely unpredictable.

No. 7 Wingate started the day by taking down No. 2-seeded West Georgia, the No. 10 team in DII football. No 6 New Haven followed suit, taking down No. 3 West Chester in a Super Region One that saw all three games end in upset fashion. Two former national champions entered the day ranked as sixth seeds. Both — Northwest Missouri State and Texas A&M-Commerce — advanced in convincing fashion. All said, there were seven lower-seeded teams that punched their ticket to the second round.

That didn’t mean some of the top teams didn’t perform, however. Here’s what we learned in the first round of the DII Football Championship.

Northwest Missouri State is back in postseason form

Last year was an odd one for the Bearcats. They battled injury, actually had a losing streak (albeit two whole games) and were eliminated in the first round in a heartbreaking 21-18 loss to Ashland. The 2018 Northwest Missouri State team put together a complete effort in the first round and look like that scary team that ran to back-to-back undefeated seasons.

TOUCHDOWN BEARCATS! Northwest’s Isaiah Strayhorn scores his second rushing touchdown of the day – this one from three yards out – and gives the Bearcats a 35-17 lead at Grand Valley State. 4:06 left in the 4th qtr. Northwest has rushed for 313 yards against the Lakers #OABAAB pic.twitter.com/G1mmpFmCVa

Freshman quarterback Braden Wright has garnered most of the talk this season with an MIAA Freshman of the Year campaign, but it was his running game that picked it up today. Isaiah Strayhorn averaged 15.5 yards per carry in amassing 171 yards and two touchdowns while Josh Caldwell added 147 yards and two touchdowns as well. That notorious Rich Wright defense did its thing, limiting a strong Grand Valley State offense to just 239 yards and 17 points. Austen Eskew powered the pass rush with three sacks while Jake Richards added nine tackles and two interceptions. The Bearcats played a well-balanced game and next week’s showdown with No. 2 Ferris State may just be the game to watch.

MORE: We picked our bracket and sleepers for the DII Football Championship

There are two Chargers — New Haven and Hillsdale — in the DII Football Championship. Both were underdogs, both are in the second round. Both were fueled by the tremendous play of their quarterbacks.

Heading into the week, NCAA.com called Hillsdale the Super Region One sleeper, mainly because, “the Chance Stewart to Trey Brock connection is as fun as any to watch in DII, giving them a dynamic duo that may surprise a few people.” The two delivered in the first round, as Stewart threw for 305 yards and three touchdowns, with 170 of those yards and two of those touchdowns going to Brock. Hillsdale now has a date with No. 1-seeded Notre Dame (OH) in the second round, and its pass attack should be a fun counter to the Jaleel McLaughlin-led rush-heavy Falcons offense.

New Haven rolled through its DII slate perfect until dropping a thrilling 17-13 loss in the season finale to LIU Post. The win cost them the Northeast-10 championship, but perhaps the end result lit a fire that makes them a dangerous threat this postseason. LIU Post was upset by Slippery Rock while the unranked Chargers, with an obvious chip on their shoulder, went blow-for-blow with No. 8 West Chester, winning 35-28 and moving on to a showdown against The Rock.

Both quarterbacks played well in the game, but it was New Haven’s Ajee Peterson who had the edge. The Chargers scored five touchdowns and Peterson had all of them. He threw for 265 yards and three touchdowns and though he only netted four yards on the ground, he added two one-yard rushing touchdowns. His West Chester counterpart A.J. Long had a fine day as well but fell one touchdown short.

MORE: A region-by-region look at the DII Football Championship

The Rock was one of two No. 7 seeds to advance. They went into Brookville, NY facing an LIU Post rush defense that was No. 10 in DII football. That didn’t seem to bother Slippery Rock running back Wes Hills one bit.

Hills found a second gear five weeks ago and has been borderline unstoppable since minus a “rough” outing against West Chester in the PSAC Championship when he still ran for 92 yards. Hills posted three 200-yard games in a row to close out the regular season and he came close to another one Saturday. The senior running back ripped off 167 yards and a touchdown against a Pioneers defense that allowed just 93.7 yards per game this season. Next up is another NE10 foe in a New Haven team that allowed 169.5 yards per game and 13 touchdowns on the ground this season.

MORE: Watch the DII plays of the week for Week 11

Tarleton State is for real

In the most complete game of the first round, the Texans utterly dominated Azusa Pacific 58-0. Everyone came to play and put up some serious numbers in the process.

Running back Xavier Turner has exploded in the second half of the season, now posting seven-straight 100-yard games. Five of those games were better than 164 yards rushing, and Saturday was more of the same as Turner posted his third 200-yard performance of the season while scoring three touchdowns. Despite the ground control, quarterback Ben Holmes was in charge as well, responsible for three touchdowns of his own.

And how about that defense? The Texans posted their second straight 58-0 shutout and have now outscored their opponents 175-3 over the last three weeks. Up next is the defending national champion Texas A&M-Commerce, who the Texans beat on October 13, 47-21. But don’t think this will be an easy matchup.

Last season, the Lions entered the tournament the No. 5 seed and opened the postseason with three consecutive upsets, including taking down Super Region Four No. 1-seed Central Washington and the No. 1-ranked Minnesota State Mavericks. Head coach Colby Carthel whipped up some of that postseason magic in the first round, lighting up DII football’s third-ranked scoring defense with 33 points. That Minnesota Duluth Bulldogs defense came to play, scoring two touchdowns, but so did the Lions, holding the Bulldogs to just 188 total yards and scoring a couple of touchdowns itself.

Throw away the records and stats. This Lions vs. Texans matchup is a Lone Star Conference rivalry on DII football’s biggest stage. Be ready for a war.

Three surprises that shouldn’t be all that surprising

Bowie State defeated West Alabama in a shootout. Amir Hall still flies under-the-radar but shouldn’t any longer. The stud quarterback threw for 360 yards and a touchdown while rushing for 51 yards and two more touchdowns. Next up is No. 1 Valdosta State. If there is a quarterback in DII football that can hang with the high-octane Blazers’ offense, it’s Hall.

Colorado State-Pueblo’s defense held Colorado School of Mines to 37 yards rushing and 17 points. Both were the Orediggers lowest outputs of the season. Brandon Payer, Darius Williams, Kyle Rosenbrock, and company are the real deal, holding Isaac Harker under 300 yards passing for the first time since Oct. 6 and just the third time all season (twice were against the ThunderWolves). They stuffed Cameron Mayberry, the No. 5 rusher in DII football, to 1.55 yards per carry. It was sweet revenge as Mayberry scorched the ThunderWolves for 203 yards and three touchdowns earlier this season. They face No. 1-seeded Minnesota State next.

Lenoir-Rhyne scored 43 points and rolled to 22-point victory. The Bears are also a bit under-the-radar, but this offense finds a way to score points in bunches without having any players atop the leaderboards. Lenoir-Rhyne has not scored less than 30 points all season. Next up is the surprise Wingate Bulldogs who convincingly upset No. 10 West Georgia. These two have faced once before this season, with the Bears coming out on top 31-24. Expect another close one in Round 2.