Corso, a former coach, has been a featured analyst on College GameDay since the show began in 1987. However, the tradition of putting on the mascot headgear began in 1996.

TRACKING CORSO: How accurate are Lee Corso’s picks on College GameDay? Meet the man who tracks them

Here are some of the best, most memorable Lee Corso moments:

We have to throw it back to the first headgear pick. Corso picked Ohio State to beat Penn State in Columbus on Oct. 5, 1996. The crowd approved.

All the times he hung out with live animals

Then there was the time he picked Navy to beat Army back in 2017, and fed a live goat.

Plus, his love for dogs.

The time he was Cowboy Corso

For his pick on the Nov. 28, 2015 episode of College GameDay Corso put on the Pistol Pete headgear and truly embraced his inner cowboy.

Back in 2013, Corso and actor Bill Murray battled it out while Corso picked the Seminoles to beat Clemson.

The time he got in a sword fight with Kirk Herbstreit

Back in November 2013, Corso picked the Trojans and suffered a bloody cut while doing it. Fun fact, he is 22-1 when choosing USC. The lone loss was when the Trojans fell to Washington on Nov. 12, 2016.

The time he dressed up as James Madison

Corso came out in full costume back in 2015 to proclaim that the Dukes would pick up a win over Richmond. He got that pick wrong, but we still give credit for the outfit.

The time he dressed in full Spartan gear, with huge hands

In November 2014, Corso picked Michigan State over Ohio State. His pick was ultimately wrong, but we will never forget his “this is Sparta!”

The time when he brought out a bratwurst in Wisconsin

The time he gave his best rattler impression

Back in 2008, Corso had some impressive sound effects to go with this headgear pick.

The time he rode off on a motorcycle as the Duck

Here are the top storylines and notable movers in the latest FCS Coaches’ Poll, released Oct. 7.

An upset inside the top 10 leads to a shakeup in the Week 5 AFCA DII football rankings. Let’s breakdown the top 25 and see how the teams stand after five weeks. 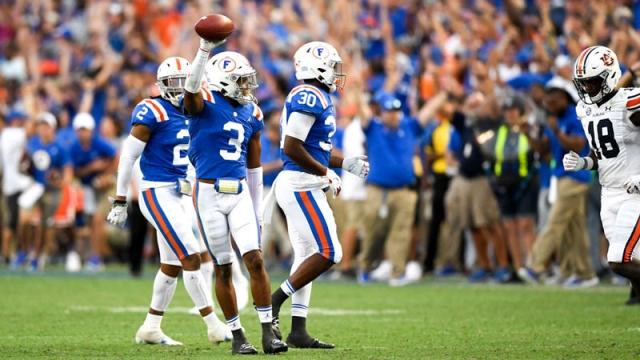 Florida moved up three spots to No. 7 in Sunday’s new AP Poll after the Gators defeated top-10 Auburn. There’s also some drama near the top, as Ohio State is now tied with Georgia for No. 3.