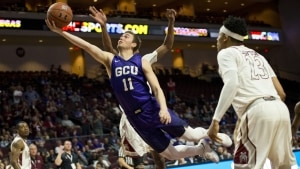 The 44 teams that have never made the NCAA tournament


Since the NCAA tournament started in 1939, there have been 3,293 total spots available. But of the 353 teams currently in Division I, 44 have never made the field.

Two of those teams have a pretty valid excuse. Both North Alabama (ASUN) and California Baptist (WAC) make the jump from Division II to Division I this season, and therefore have never been eligible for the Division I tournament.

And it’s important to remember that the NCAA tournament’s format has changed drastically throughout the years. The first tournament in 1939 only had eight teams and didn’t expand to 16 until 1951. The modern 64-team format didn’t appear until 1985, and it wasn’t until 2011 that the field expanded to the full 68 teams (including the First Four) that we’re familiar with now.

Even taking the volatility of the process into account, a small subset of these 44 teams stand out — the four teams that have been eligible for every NCAA tournament but have failed to make it to one.

In 2017, Northwestern gained plenty of attention as the Wildcats — previously one of the five original teams to never make the tournament — not only qualified for their first ever tournament, but actually picked up a win, and gave eventual runner-up Gonzaga a run for its money in the Round of 32.

Last year, we tracked each of the then-43 teams that had never made an NCAA tournament through their conference tournaments. Three reached the championship game.

After a close three-point win in the opening round of the WAC tournament, Grand Canyon reached the championship game with ease before losing to New Mexico State 72-58.

South Dakota finished 11-3 in Summit Conference play last year, and even handed South Dakota State its lone loss in the conference. But the Jackrabbits got revenge in the Summit title game, beating South Dakota 97-87 to secure the automatic bid.

Finally, Lipscomb had its best season in program history, going 23-10 (10-4, A-Sun) and winning the conference title with a 108-96 win over Florida Gulf Coast. That earned the Bisons their first NCAA tournament appearance, where they lost to 2-seed North Carolina 84-66 in the first round.

Lipscomb was the only team to graduate from the list last year, leaving us with 42 teams that had never made the NCAA tournament after last season. With the addition of North Alabama and California Baptist, we have 44 heading into the 2018-19 season.

Below is a list of all 44. We looked at the best season they’ve had in program history (not counting seasons played as an independent team), and their performance in conference play last year (where they finished in regular season standings and the conference tournament):