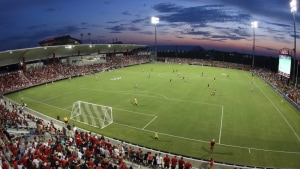 The 11 best places to watch college soccer, according to the fans


It’s been about a year since we last checked in with college soccer fans to find out their favorite places to watch the sport. It was time to ask again.

First, some background. We posed that question on Facebook and Twitter and you responded last summer with a whole lot of strong takes that we winnowed down to these nine stadiums. What makes a college soccer stadium great is up for debate so we asked again for your favorites. You delivered. We read all your responses and narrowed them down to the top 11 (in no particular order) along with some honorable mentions. Here they are:

Ludwig Field first opened in 1995. According to Maryland athletics, the complex includes a Bermuda grass playing field. The most recent update for the facility was the installation of a permanent press box in 2008. It’s also home of the most recent DI men’s champion, as Maryland took home the 2018 national championship.

Ludwig Field is the only choice. @MarylandMSoccer and @umterps Show ’em what 10K screaming fans looks like. #FearTheTurtle

Spry Stadium, which holds about 3,000, is considered one of the top facilities in college soccer. It features a fully-lit natural grass playing field along with two natural grass practice fields. The stadium includes a state-of-the-art scoreboard, sound system, locker rooms for both the men’s and women’s teams, a pressbox with rooftop observation deck and concession stands. According to Wake Forest, the men’s soccer team has ranked in the top five nationally in attendance each year since 2015, when they led the nation with a season total of 46,248.

According to Louisville athletics, Dr. Mark & Cindy Lynn Stadium is an $18.5 million complex featuring a seating capacity of more than 5,300. The facility opened on Aug. 29, 2014, with a crowd of 7,047 witnessing the first match there. Fans’ views from every angle are modeled after Major League Soccer’s Sporting KC’s stadium.

Lynn Stadium at Louisville is definitely the best

According to UCSB, Harder Stadium holds 17,000 and was built in 1966. Apparently, you can see the Santa Ynez mountains to the north and feel a breeze from the Pacific Ocean. Sounds pretty nice, right? The stadium is named after Theodore “Spud” Harder, a former coach of the Gauchos’ football team. In 1991, the US Women’s National Team made an appearance right before it went off to China to win the 1991 FIFA Women’s World Cup. Last year’s men’s College Cup was held in Santa Barbara. Oh, and they even call this place “Soccer Heaven.“

Stone Stadium debuted in 1996. The surface was replaced in 2009 with a new state-of-the-art irrigation system. The seating capacity is 5,000.

Al F. Caniglia Field opened in the fall of 1949 to serve as the home for the football team. It was renovated in 2012 to become the facility for the men’s and women’s soccer teams and holds about 3,000 seats. According to Omaha, the infill is a unique blend of cork and coconut husk, which enhances playability and decreases field temperatures. It is the only NCAA Division I field to receive the prestigious FIFA Recommended 2-Star certification.

I second this! A shot of our stadium from the other direction. pic.twitter.com/0PQegz4yuL

According to Penn State’s website, Jeffrey Field is widely regarded as one of the finest grass surfaces in the country and honored as the 2006 Collegiate Soccer Field of the Year by the SportsTurf Managers Association. The stadium holds 5,000 and in 2003 added a press box, video booth, expanded bleachers and a new field surface.

The soccer facility is natural grass with a drainage system that makes the playing surface one of the best in the midwest, according to the university’s website.

Morrison Stadium, which opened in 2003, has a seating capacity of 7,500. The stadium includes a video scoreboard, champions room, nearly 2,000 covered chairback seating, five luxury suites, an enclosed press box, concession stands and a banquet area. According to Creighton athletics, both the women’s and men’s programs have seen record-setting attendance numbers, with the men ranking in the NCAA top 10 every year since 2003 and the women topping the league in attendance 10 of the past 12 seasons.

@creightonmsoc has the best. Better than some MLS stadia I’ve visited.

Armstrong Stadium first opened in 1981 and underwent major renovations in 2000. The stadium supports 6,500 seats. The facility hosted the 1992 Men’s Olympic soccer team as the United States team played a qualifying match against Canada.

Shouldn’t the question be who has the second-best stadium?

Clearly Armstrong Stadium is the best in the country…#Q49 ⚪️🔴 pic.twitter.com/E1Sp9AzBBO

One of the the best kept secrets in the country.

University of Portland has the best fans, the best legacy, and the best stadium in #NCAASoccer. I think a certain World Cup champ might agree with us, too. Her hair is shorter and pinker nowadays. pic.twitter.com/q9DUQewkbH