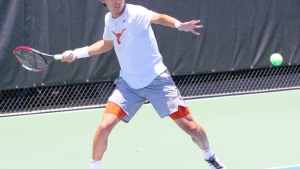 The Longhorns earned the spot in the final match after taking down Florida 4-2 in the semifinals. Texas met Wake Forest for the final battle after the Demon Deacons beat UNC in a close 4-3 competition. The tournament began with a field of 64 teams on May 3.

The quarterfinals, semifinals and championship matches took place from May 16-19 at the USTA National Campus in Orlando, Florida, hosted by the University of Central Florida and the Greater Orlando Sports Commission.

The matches were regulation dual matches. Three doubles matches consisting of six-game sets were played for one team point, followed by six singles matches, each valued at one team point; played the best of three sets. No-ad scoring was be used and a seven-point tiebreaker (first to seven points, must win by two points) was be played at six-games-all. The team winning four or more team points advanced in the championship bracket.

Below, you can find participating teams, stats and results from each quarterfinals matchup.