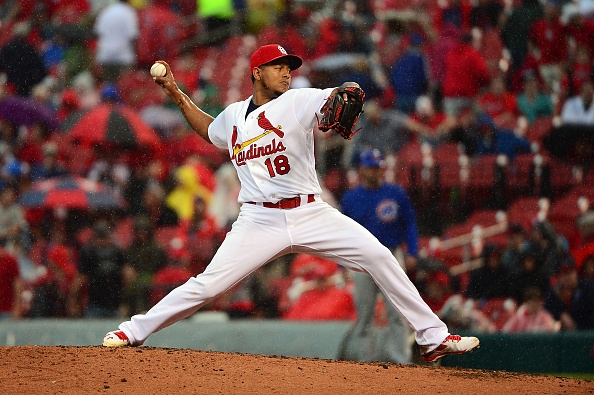 Carlos Martinez is being sued by a woman who claims he gave her non-life threatening STDs, allegations he says are “100 percent false.”

The Cardinals right-hander is pleading his innocence after a woman from his past brought on the allegations.

The woman, who claimed to have an on again, off again relationship with the pitcher, filed the suit in district court in Miami, stating she began her relationship with Martinez in 2012 and rekindled it recently, according to TMZ Sports. She claimed the two had sex again on Dec. 16 and she felt sick two days later, eventually testing positive for multiple STDs.

Martinez is being sued for negligent transmission of sexually transmitted diseases, fraud and more as the woman is seeking $1.5 million in damages. The pitcher is currently under a one-year, $539,000 deal.

The 2015 All-Star reportedly “swore to God that he was not infected with any sexually transmitted disease,” when the woman asked him about his history prior to them hooking up. The unidentified woman also claimed that she told the pitcher of her condition and he bolted for the Dominican Republic, refusing to call her back.

Martinez’s camp is denying any wrongdoing on the pitcher’s behalf.

“I can tell you most assuredly the allegations are 100 percent false,” Martinez’s lawyer Ruben Scolavino told TMZ Sports.

Martinez, 24, is 4-0 with a 1.93 ERA this season in 28 innings and has walked eight while striking out 20. His ERA currently ranks seventh in the National League. The Cardinals (12-10) enter Friday in third place in the competitive NL Central.

“I applaud the organization for being very cautious for the long-term care of this kid and not just for what we need right then and we’ll continue to be smart,” Cardinals manager Mike Matheny said via ESPN. “We took our time this spring and Carlos did his part and is just getting better.”