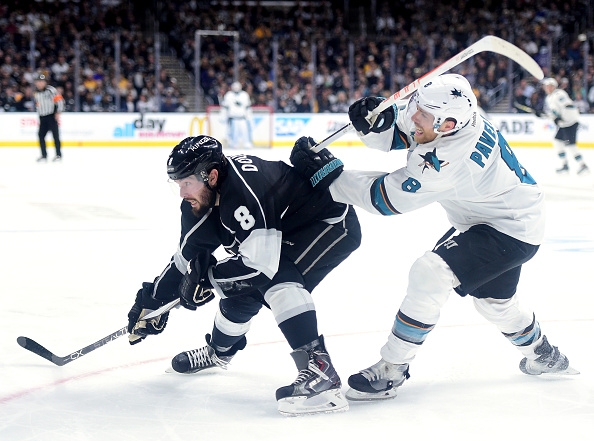 The Kings look to stave off elimination, while the Sharks hope to advance to the next round when they take the ice for Game 5. (Photo : Getty Images)

The Sharks look to advance to the second round, while the Kings hope to win with their backs against the wall when the lights come up for Game 5 live from the Staples Center in Los Angeles for this Stanley Cup playoff series.

San Jose won both prior meetings at the Staples Center, knocking off their California rivals 4-3 in Game 1 and 2-1 in Game 2. When the series shifted to the SAP Center, Los Angeles scored a 2-1 overtime victory in Game 3 before falling, 3-2, in Game 4.

The Sharks’ power play was lethal in Game 3, going 3-for-4 as Brent Burns, Joe Pavelski and Patrick Marleau each found the twine on the man-advantage. Pavelski’s tally was his fourth of the postseason, while Burns scored for the second time and Marleau netted his first.

Trevor Lewis (2) and Luke Schenn (1) each scored in the third period, but the Kings’ comeback bid ended there.

Though the Kings, who overcame a 3-0 series hole to oust the Sharks en route to winning the Stanley Cup two years ago, have returned home, it may not be a good thing. San Jose was the NHL’s best road team this past season and is 4-0-0 in that building this year.

“We’re comfortable on the road, we’re very good on the road,” Sharks coach Peter DeBoer said via NHL.com. “I don’t think the venue is an issue. The L.A. Kings are an issue. They’re going to be a tough out.”

This has been a tightly contested, physical series as each game has been decided by one goal. Los Angeles is hoping to draw off of its history in bouncing back from series deficits.

“We’ve been in that situation so we know what it takes,” Kings forward Marian Gaborik told NHL.com. “But all it takes now is to win one game and move from there. That’s what we have to focus on and what we have to do.”

In net, the mentor vs. protégé storyline continues as former King Martin Jones will man the crease for San Jose, while Los Angeles tabs Jonathan Quick. Jones had 26 saves on 28 shots last game, while Quick yielded three goals and turned aside 26 shots.

What will the result be this series for the Sharks?