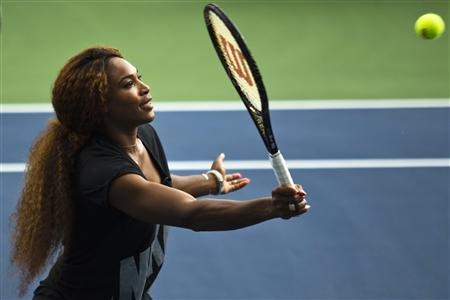 Serena Williams So Dominant in First Round at the U.S. Open That Her Opponent Needed Ball Boy's Compassion


Serena Williams So Dominant in First Round at the U.S. Open That Her Opponent Needed Ball Boy’s Compassion

No. 1 ranked Serena Williams surrendered just one game to Francesca Shiavone during Monday’s first round of the U.S. Open (Photo : Reuters)

If Serena Williams wasn’t going to provide any consolation, Francesca Schiavone had to find it elsewhere during their opening-round match Monday at the U.S. Open.

Williams won the first eight games of the match against Schiavone, a former world’s No. 4-ranked player who won the 2010 French Open and was a finalist there a year later.

According to a USA TODAY Sports report, Schiavone had won just 25 percent of her first-serve points and lost a 26-point rally to the top-ranked Williams.

After the match, Schiavone was asked about the impromptu hug. (Watch the Hug In the Video Below)

Schiavone was down 4-0 in the second set when she finally won her first game of the match.

When Schiavone finally got on the board more than 50 minutes into the hour-long match, holding serve to win her first game with a volley winner, she swung her right fist in a celebratory roundhouse punch and shouted.

Shiavone then showed a huge smile when she returned to the sidelines. She threw her racket toward her changeover chair.

Williams was nearly perfect, making only eight unforced errors, compiling a 13-3 edge in winners, hitting serves faster than 115 mph, and taking the first 10 games. She needed only an hour to advance to the second round.

“I knew playing a former Grand Slam champion in the first round was a really, really tough draw,” the New York Daily Post reported Williams as saying, “so I tried to be super serious.”

On this night, with the outcome no longer in doubt, Schiavone was the one who was not serious.