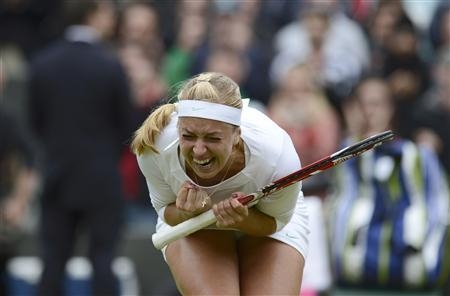 Women’s No. 1 Serena Williams, who dominated the French Open and was blazing through the Wimbledon field, was shocked by German No. 23 Sabine Lisicki 2-6, 6-1, 4-6 in the fourth round, making her the latest upset victim in a Wimbledon chock full of stunning outcomes.

Williams has a streak of 34 match victories snapped by the German, and lost her bid for a sixth All England Club crown. Leading up to her matchup with Williams, Lisicki sounded the tune of a confident player not intimidated by Williams’ powerful serve and ruthless all-around game.

“Everybody’s a human being,” Lisicki said. “I was in that situation last year when everybody was saying that [then No. 1 Maria]Sharapova was the favorite. I’m probably going into that match being the underdog but I like that. I have nothing to lose.” Lisicki also upset Sharapova in the same round at Wimbledon in 2012.

Once Lisicki won the first set, that seemed to open the possibility that Williams could be had. After this loss, Serena is 8-8 at Wimbledon after dropping the first set.

Puig made her statement on Day 1 of Wimbledon by knocking off No. 5 Sara Errani in straight sets, after Errani had just reached the quarterfinals of the French Open. She was then victorious in three sets over Silvia Soler-Espinosa of Spain in Round 2, followed by a comeback win over Eva Birnerova, in which she dropped the opening set.

Stephens won in straight sets in Round 1 as well, against fellow American Jamie Hampton. In Round 2 Stephens needed three sets to beat Andrea Petkovic of Germany, and another three sets to grind out a win against Petra Cetkovska of Czechoslovakia.