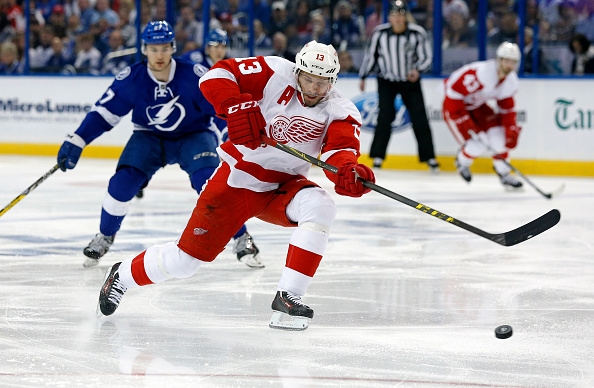 Pavel Datsyuk and the Red Wings try to stay alive against the Lightning in Game 5. (Photo : Getty Images)

The Lightning return to home ice to try and become the first team to advance to the second round of the Stanley Cup playoffs, while the Red Wings look to send the series back to Detroit when the puck drops in Tampa Bay for Game 5.

Nikita Kucherov scored his fourth and fifth goals of the series in Game 4 to stake the Lightning to a 2-0 lead, but the Red Wings drew even on tallies from Darren Helm (1) and Gustav Nyquist (1). Ondrej Palat then found the twine on the power play for his first goal of the series, for the game-winner in the third period.

Detroit hasn’t overcome a 3-1 series hole since 1992, but teams have done so in each of the last three Stanley Cup playoffs. The Red Wings are confident they can defy the deficit.

“We’ve been playing this way for the last 30 games of the season,” Red Wings forward Justin Abdelkader said per NHL.com. “We’ve had to win and accumulate some points to get in the playoffs. The game to close a team out is always the hardest game to win and we’re not going to make it easy on them.”

After this matchup went to seven games in Round 1 last year and was ultimately won by the Lightning, Tampa Bay is in no mood to let it go the distance again.

“We’re not trying to focus on getting extra rest, we just want to win hockey games,” Lightning defenseman Victor Hedman told NHL.com. “We have a chance to close it out but we expect them to be at their best.”

In net, Petr Mrazek is expected to man the crease for the third straight game for the Red Wings. He blanked the Lightning in Game 5 last year and made 30 saves on 33 shots last game. The Lightning will counter with Ben Bishop, who yielded two goals and turned aside 26 shots in Game 4.

This could be the end of the line for Pavel Datsyuk if the Red Wings get eliminated, as he is reportedly returning to Russia after this season.

Will the Lightning wrap up this series in 5 games?