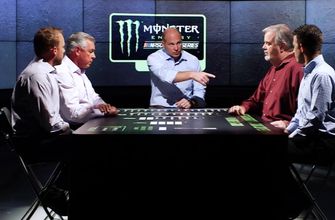 ADAM ALEXANDER: Today we open up the second round of the playoffs on the Monster Mile in Dover, Delaware. Race number two be at Talladega. We wrap things up at Kansas Speedway. Let’s start moving drivers over. And when you look at the advantage over the cut line, we’re talking about the same guys. They’re in a great position. Any arguments on Kyle Busch? Can we move the A-team?

ADAM ALEXANDER: Comes in 47 points above the cut line. What about Kevin Harvick? Everybody feel good about Harvick?

ADAM ALEXANDER: Who, oh by the way, in the spring, won at Dover and at Kansas. Martin Truex Jr., we also know he’s good at Dover. And Kansas comes in 30 points above the cut.

A.J. ALLMENDINGER: I think he’ll be all right.

– Any pause in Brad Keselowski? 17 point advantage for him, when you look at his position above the cut. They’ve had momentum.

– I think right now he is definitely rounding out the fearsome foursome we’ve been talking about.

A.J. ALLMENDINGER: And you go to Talladega, I mean, I know it’s a wild card. But if you had to put your money on somebody, I’d put it on Brad.

– We’ve moved four drivers. But I want to focus on the next three drivers, Clint Bowyer, Joey Logano, and Kurt Busch.

– I sum it up in one word, Ford. You got to believe that Joey fits right in there. I think all three of these teams right here have got that as an advantage, and goes back to the other word we’ve used, speed.

– Joey has been consistent with that speed, and that’s what I like is the consistent speed. You can go to multiple tracks and different types of tracks, still be fast, still be up front. That means the confidence is high. And it appears that he’s gotten over the disappointment that happened a couple of years ago, and he’s starting to be himself again on the race track. And I feel really good about him making it through.

– Am I the only one that has no idea how Ryan Blaney won that race at Charlotte? I didn’t at any point of that race think Ryan Blaney could win this thing.

JEFF HAMMOND: Did you not see that hat laying on the racetrack, that they pulled that rabbit out of, that happened to be the 12 car?

DAVE MOODY: I don’t know if that’s a good thing or a bad thing for that race team. They’re not racing the way their two teammates are racing right now, but they’re kind of doing just enough to get where they need to be.

– I look at Dover. He’s OK there. Talladega– he’s very fast, and runs up front at Talladega.

A.J. ALLMENDINGER: Kansas, mile and a half program, they’re really good. So if I had to bet on somebody, it’d be him.

– We’ve not talked about Kyle Larson, and I think here’s a driver that, while he hasn’t won, we know how he’s been knocking on the door. In fact it was that runner up finish at Las Vegas that served as the tiebreaker that allowed him to advance to the round of 12.

– So second year in a row, he missed being eliminated in the round of 16 by that much. And it seems like every round he’s just sneaking through by a little tiny bit. Man, if you dance on the edge of that blade, at some point you’re going to get cut.

– We’ve got 12 drivers on the board. We moved six. Six remain for two positions. I want each one of you to give me a driver that you would move to the next round. Who’s your guy, Dave?

– You say Bowyer. Based on recent speed, I’ll be the tiebreaker, and say let’s put in driver 9, Chase Elliott. We have one spot remaining.

DAVE MOODY: Either we’re gonna go with consistency, or we’re going to go with the guy that could win at any given moment.

– Out of anybody that’s left on the board right at the moment, I would put all my money on Clint Bowyer making it.

– They’re all talented. I mean, even from inside the cockpit of a race car, I get in awe of Kyle Larson when he gets the top rolling around these places. Does he have as fast of a race car as Clint Bowyer or Kurt Busch, probably not. Does he make his car faster than them? Yes, he does.

– You know, it’s interesting. Stewart-Haas put all four of their drivers in the round of 12. We say the only driver from SHR moving on is Kevin Harvick. We eliminate Eric Almirola, Kurt Busch, and Clint Bowyer. And the final driver we have moving to round three of the playoffs is Kyle Larson. Four Fords, two Chevys, and two Toyotas still alive for the championship. And we’ll return in a few weeks and see how we did.