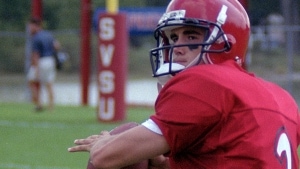 Packers coach Matt LaFleur was a NCAA DII football standout as a player and coach. Here are 11 of his records.

The Green Bay Packers named Matt LaFleur their 15th head coach in franchise history on Jan. 7. Before LaFleur made waves as an offensive coordinator in the NFL, he both played and coached DII football. And he was pretty darn good. Let’s take a look at a few of the records LeFleur set in his DII career.

Matt LaFleur’s path to the #Packers

LaFleur has long been a Midwest guy. He grew up in Mount Pleasant, Michigan and wound up heading to Western Michigan as a wide receiver. He transferred to Saginaw Valley State where he stepped under center for the Cardinals.

MORE: Watch these former DII players in the NFL playoffs

Where do we start? The Cardinals went a combined 29-8 in LaFleur’s three years at quarterback, reaching the NCAA tournament all three years in one of the program’s most successful runs in history. It’s been nearly two decades since LaFleur took a snap, and most of his records have been broken, but his name still liters the record book.

LaFleur begins his coaching career in 2003 at SVSU

When LaFleur concluded his DII football playing career, his coaching career began. He became an offensive assistant coach, and to no surprise, the Cardinals offense exploded.

Now that it’s official…we would like to congratulate Matt LaFleur on becoming the head coach of the Green Bay Packers! https://t.co/M1BfYrcq2L pic.twitter.com/v0u2hDGzFn

Under the tutelage Randy Awrey, arguably the most successful head coach in program history, LaFleur helped the 2003 team break his own team and passing records. The 2003 Cardinals went 12-1 overall and a perfect 10-0 in the GLIAC, one win better than LaFleuer’s 11-2 2001 team. The quarterback of that team, LaFleur’s understudy Mark Radlinski, set the then-single-season record for passing yards (3,428) and his 32 touchdowns are still the best ever in program history. Radlinski’s favorite target, Glenn Martinez, set then-single-season records for receptions (66) and yards (1,130) both of which are top 5 all-time in SVSU lore.

Matt Ryan of the Atlanta Falcons and Jared Goff of the Los Angeles Rams are just two examples of NFL quarterbacks who found tremendous success when LaFleur was around. In 2007, Ashland got that ball rolling, giving LaFleur the first offensive coordinator position of his career.

Matt LaFleur, our offensive coordinator during a record-breaking and #NCAAD2 postseason year of 2007, has been named the head coach of the National Football League’s Green Bay Packers! 👏

After Saginaw Valley State, LaFleur went to Central Michigan as an offensive assistant and returned to DII football for a quick stop at Northern Michigan where he served as quarterbacks and wide receiver’s coach for the 2006 season. Then came Ashland’s record-setting 2007.

That season was Ashland’s Billy Cundiff’s first under center as a starter. Until Travis Tarnowski came around, Cundiff went on to become, and is still, one of the most prolific passers in program history, second all-time in yards passing (9,143) and touchdowns (79). That season Cundiff and LaFleur led Ashland to a program-record 440 points in ten games, crushing the previous record of 354 scored in 1972. The Eagles finished with 528.2 yards per game, not far off from the DII leader MSU Texas and its 549.4 average. That Eagles team finished 8-2 and returned to the NCAA postseason for the first time in a decade.

That was the end of LaFleur’s DII football career. He then spent time with the Houston Texas and Washington Redskins before heading back to the college ranks as the quarterback coach for GLIAC legend Brian Kelly at Notre Dame where Everett Golson had the best year of his career. It’s been a fast rise up the NFL ranks ever since. The well-traveled offensive-minded coach will have some high-expectations immediately placed upon him with his name amongst the ranks of Super Bowl-winning head coaches Vince Lombardi, Mike Holmgren, and Mike McCarthy before him.

MORE: Valdosta State wins 2018 title | Programs with the most titles