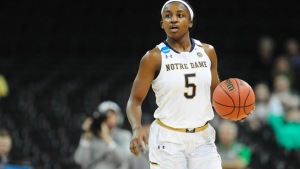 There’s been no better and more entertaining rivalry in women’s college basketball over the past decade than the one between Notre Dame and UConn.

From Breanna Stewart’s dominance of the Irish in the Final Four while UConn won four straight national championships to Arike Ogunbowale’s last-second shot in overtime of the national semifinals last season that beat the Huskies, these storied programs have gone toe-to-toe on the game’s biggest stage.

Their history goes back even further. Even as Pat Summitt and Tennessee were playing the main foil to Geno Auriemma’s Huskies in the late 1990s and early 2000s, Muffet McGraw’s Irish were right there, too, playing memorable games with their former Big East rival. Who could forget the Irish knocking UConn out of the Final Four in 2001? That came weeks after UConn great Sue Bird hit a shot at the buzzer in the Big East tournament title game to lift UConn to that championship.

This meeting has a different feel: The Irish are the clear favorites. Something that’s rarely been the case over the past two decades.

The top-ranked national champions and No. 2 Huskies will play in South Bend, Indiana, on Sunday in the Jimmy V Classic with the No. 1 ranking on the line. They’ve played evenly over the past eight seasons, splitting their 16 games.

Check out some of the best from our win last night over #16 DePaul. #BleedBlue pic.twitter.com/rAlvt54y4d
— UConn Women’s Hoops (@UConnWBB) November 29, 2018

“When you play each other in December it’s more of a, we’re going all the way over there and they are going all the way over here and we happen to be passing each other on the street corner,” Auriemma quipped after a win over DePaul on Wednesday. “Somebody’s going to say something and somebody is going to say something, then we’re going to slap each other around a little bit and then go home and then say, ‘See you in March.’ We know they’re out there and they know we’re out there and then it just becomes for a couple days, big. Then after that it goes away.”

The game Sunday, which is the 58th meeting between the top two teams in the AP poll, has long been sold out. The last 1 vs. 2 matchup was also UConn and Notre Dame in 2016 in South Bend. That was after UConn lost its Big 3 of Stewart, Morgan Tuck and Moriah Jefferson and the Huskies were also expected to lose to the Irish. They came away with a 11-point win.

“I’m excited that it’s a sellout. It was a sellout pretty much from the day the tickets went on sale,” McGraw said. “I think our fans are excited about the game. I think nationally it’s one of the best rivalries in women’s basketball, so I think people will be tuning in to see what happens here. It’s a great rivalry — we really enjoy it.”

The Irish return nearly the entire team from last season that won the school’s second title. They also have Brianna Turner back after she sat out last season with an ACL injury.

“This is a great opportunity for women’s college basketball,” Turner said. “I think a lot of people are going to tune in.”

The Huskies lost three major components from last season’s team that was undefeated until losing to the Irish in the semis. It was the third time in the last eight years that Notre Dame ended UConn’s season in the Final Four.

“We lost two of our starters and they kept all of their starters and added another big person. So, it’s going to be a dog fight, we know that,” UConn senior Napheesa Collier said. “We’re always the ones people are shooting at, so I don’t feel any less than before. We’re not the underdog, but people are always rooting against us and nothing’s different for this game, so nothing has changed.”

Auriemma is excited to see what his young players do in their first exposure to a big-time atmosphere, yet knows that a win or loss won’t really determine the outcome of the season. The Huskies are starting a freshman and sophomore to go along with their Big 3 of Collier, Katie Lou Samuelson and Crystal Dangerfield.

“Either way. I mean we beat them last year at the XL Center and that didn’t do us any good in March. So, I don’t think what comes out of this game other than we have two young players and I’m anxious to see how they do more than anything,” he said.

While UConn doesn’t have one of its gaudy winning streaks on the line, the Huskies do have a few things at stake. UConn has won 121 consecutive regular-season games since falling to Stanford in 2014. The Huskies also have won 53 straight non-conference contests in the regular season and 158 games without a loss in regulation.

All of those could come to an end on Sunday.