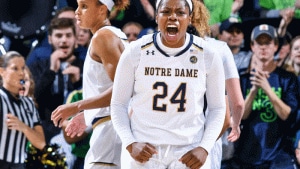 Notre Dame-Louisville women's basketball: Ogunbowale lifts Irish to win in No. 1 vs. No. 2 showdown

Louisville will have to wait to reach No. 1 at least a little longer. Arike Ogunbowale made sure of that.

In the first women’s college basketball game to not feature UConn in a No. 1 vs. No. 2 matchup since the 2012 NCAA tournament, top-ranked Notre Dame beat Louisville, 82-68, Thursday night in South Bend, Ind. Final Four hero Ogunbowale had more magic for the Irish (15-1, 3-0 ACC), making a buzzer-beater to end the third quarter and then knocking down a few huge shots in the final 90 seconds to clinch the win after Louisville cut the deficit to 2 points.

Ogunbowale scored 26 of her 30 points in the second half.

Arike Ogunbowale knows a thing or two about buzzer-beaters 🙌 pic.twitter.com/TxQlwvDFY5

With a win, Louisville (14-1, 2-1) would have needed to beat only Georgia Tech on Sunday before ascending to No. 1 in the country for the first time in program history. Instead, Notre Dame proved its mettle in another win since losing to UConn on Dec. 2.

The Irish are 8-0 since falling to UConn in the season’s first No. 1 vs. No. 2 matchup. In the first seven games, Notre Dame won by an average of more than 30 points.

Notre Dame might be keeping the No. 1 ranking, but in the first half, Louisville’s Asia Durr looked like the No. 1 player in the country. She made 6 of her first 8 shots and ended up scoring 29 points in the game as the Cardinals led 35-33 at the half.

Even with the Irish going plus-12 on the glass, Notre Dame went into the break with a season-low first-half point total. Jessica Shepard had 13 rebounds by herself in the first half.

But Notre Dame had its own troubles. The Irish finished with 18 turnovers. Then Ogunbowale couldn’t miss.

Going into the game, Louisville was only 1-10 all-time against the No. 1 team (The Cardinals beat No. 1 Baylor in the 2013 NCAA tournament). The Notre Dame-Louisville matchup was also the first No. 1 vs. No. 2 game to not feature UConn since 2012, when top-ranked Baylor beat Stanford in the Final Four.

Last year, the Cardinals hinted at a possible changing of the guard in the ACC…only for Notre Dame to regroup and win the national title. Louisville got close, however, beating the Irish in two meetings last season, including a 100-67 rout at home, and reached the Final Four. Only a loss to Mississippi State kept Louisville out of the national title game.

Thursday’s loss is a missed opportunity for Louisville. But the Cardinals know ending No. 1 is more important than being No. 1 in January.

Still, Louisville will have another prove-it moment soon: UConn visits on January 31.