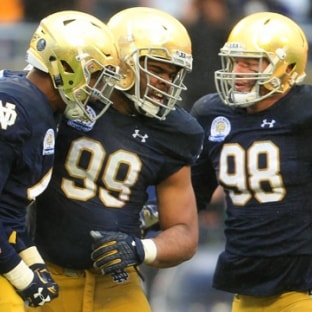 
SOUTH BEND, Ind. — Defense is supposed to be one of the strengths of Notre Dame’s 2018, with 10 returning starters.

So despite surrendering 913 yards on 123 plays in Saturday’s spring game, Fighting Irish coach Brian Kelly showed little concern with the progress on that side of the ball.

“They’re going to be attacking the football at the back end of the defense, which at times (last year) was frustrating,” Kelly said.

We are ND. #GoIrish pic.twitter.com/YXmBJ0ZEHH

The defense has a new coordinator for the second straight season.

Clark Lea follows Mike Elko, who left for Texas A&M after one successful season in South Bend. Lea arrived with Elko from Wake Forest last year, and then got a promotion to replace his mentor.

Lea’s linebackers have run everywhere this spring just to keep up with their 36-year-old coach, who seemingly is in motion from the moment he wakes up. Elko’s basic 4-2-5 defense hasn’t changed under Lea, who has been trying to create the depth Kelly feels is needed, particularly at linebacker and on the defensive line.

Three players who decided to forego a chance at the NFL this season have made significant moves. Drue Tranquill goes from rover (a linebacker/safety hybrid) to inside linebacker. Te’von Coney moves from inside linebacker to middle linebacker, where Nyles Morgan led the team in tackles last season.

Defensive lineman Jerry Tillery, who had 4 ½ sacks last season, is going from playing right over the center to a three-technique defensive tackle spot. “The ‘three’ gives (Tillery) an ability to be a penetrator,” Kelly said. “We want to use his quickness, length and ability to create a new line of scrimmage.”

Saturday, Tranquill had nine stops, including seven solos, a sack, a quarterback hurry and a pass broken up. Tillery had two tackles, including a sack. Coney had one tackle in very limited duty.

Junior Khalid Kareem has made such strides at defensive end that graduating senior Jay Hayes recently decided to play his fifth season at Oklahoma. Meanwhile, the Irish remain strong at cornerback with junior Julian Love, who had three interceptions, including two for touchdowns and a school-record 20 passes broken up, and speedsters Shaun Crawford and Troy Pride Jr.

Safety Alohi Gilman, now eligible after sitting out 2017 following his transfer from the Naval Academy, caused a fumble and recovered it and finished with six stops.

In case you couldn’t make it to Notre Dame Stadium for Saturday’s Blue-Gold Game we have all of the highlights here for you. #GoIrish pic.twitter.com/d2UyU4mUA3

“There is great depth at the corner and safety positions,” Kelly said. “I like our rotations on the defense line. If there’s one concern it’s finding depth at the linebacker positions. But it’s a confident group.”

Here are some other things to know from a spring game won 47-44 by the Blue team over the Gold in front of 31,729 at Notre Dame Stadium.

WIMBUSH THE ONE (A)

Senior quarterback Brandon Wimbush, last year’s starter, did enough during Saturday’s game — he completed 19 of 33 passes for 341 yards and two touchdowns against one interception — to go into the summer and fall as Notre Dame’s No. 1 quarterback over junior Ian Book, who rallied Notre Dame in the Citrus Bowl victory to a pair of touchdowns after Wimbush was ineffective against LSU.

Book completed 17 of 30 passes for 292 yards, including an 85-yarder to Chase Claypool, who finished with six receptions for 151 yards and two scores.

“I think it’s pretty clear that Brandon went out and got a chance to go with the first group and Ian played with the second group,” Kelly said. “You know, that’s not etched in stone but that’s the way they have been trending. I don’t think there was anything today that changed that, but we know Ian Book can win for us. So, it’s 1A and 1B.”

It was a close race, but @WimbushB7 brings home Offensive Player of the Game honors for the 2018 Blue-Gold Game.#GoIrish pic.twitter.com/0wSG0YA2ci

Senior Dexter Williams and junior Tony Jones Jr. spent all spring battling to replace departed 1,000-yard rusher Josh Adams. Williams gained 117 yards on 11 carries, including a 72-yard carry when he was kept out of the end zone by track speedster Troy Pride Jr.

Kelly liked the production he got from multi-positional players Jafar Armstrong and Avery Davis, who is the No. 3 quarterback behind Wimbush and Adams. Armstrong had 69 combined yards receiving and rushing, including a 25-yard scoring run. The 5-foot-11, 203-pound sophomore Davis picked up 30 yards rushing on 11 carries and 24 more on two receptions.

“The conversation we had with Avery is what do you want to do? If you want to stay in the position or we think you’ve got some talent to help our offense and he wanted to do this,” Kelly said. “He doesn’t want to give up his ability to play quarterback down the road, but in the meantime, you know, you need to play this year and so this gives him that opportunity.”

This article was written by John Fineran from The Associated Press and was legally licensed through the NewsCred publisher network. Please direct all licensing questions to legal@newscred.com.