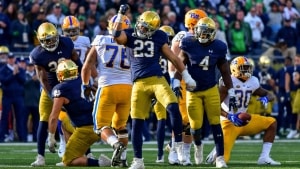 
SOUTH BEND — They don’t ask “how,” they ask “if.” No matter how Notre Dame has looked at times this year, the Irish are 7-0 heading into the team’s bye week.

“I’m super excited. We’re 7-0 with a very difficult schedule. Beat three top-25 teams at the time. I’m really proud of our football team in terms of where we are,” Kelly said. “If you had asked me if I’d be 7-0 at the bye week, I’d be extremely pleased and happy, and I’m certainly that as I sit here right now.”

Notre Dame was almost one of those top-10 teams to go down, as a touchdown pass from Ian Book to Miles Boykin with 5:43 left in the game finished off a 19-14 comeback victory over Pittsburgh. The Irish trailed the majority of the game, but still found a way to keep their undefeated season alive.

It was the third home game of the year where Notre Dame struggled with a lesser opponent. They won by eight over Ball State (3-4) and just five points over Vanderbilt (3-4). Those narrow victories led to quarterback Brandon Wimbush being benched in favor of Book.

Despite the benching, Wimbush has been there to help Book and the Notre Dame offense.

“I’m really pleased. He’s right next to (Book) every time Book comes off the field,” Kelly said. “The way he’s gone to work every day has helped our football team in so many ways in terms of attitude and morale. It’s a positive situation for us.”

The bye week allows some guys to get back to 100 percent, health-wise. Cornerback Troy Pride Jr. missed Saturday’s game with a sprained ankle. Jafar Armstrong is still rehabbing from the knee infection he got two weeks ago. Both guys are expected to be back for Notre Dame when it faces Navy on Oct. 27.

Having time off their feet isn’t a bad thing for the players, though.

“It’s going to be nice, especially for the body,” Irish defensive end Khalid Kareem said. “Gets me a chance to go see some high school football games.”

An extra week off also allows Notre Dame to clean-up some things, specifically with the kickoff team. The Irish have allowed two kickoff returns for touchdowns this season, including one against Pittsburgh on Saturday.

“It’s really about kicking the football. Our placement has not been where it needs to be,” Kelly said. “We’re kicking it down the middle of the field. It starts with consistency in kicking. That’s where a lot of this starts from. We covered seven kickoffs against Virginia Tech. That’s crazy.”

The Irish will practice Monday and Tuesday before the players get off Wednesday through Saturday. While the players will be off, the coaches won’t be. The Irish coaching staff will take the four days to hit the recruiting trail before preparation for Navy begins.

“We’ve got a big opponent ahead of us in Navy, so we’ll take the break, but we’ll have to lock right back in again,” Kareem said.

Notre Dame’s final five opponents are vs. Navy (2-4) in San Diego, at Northwestern (3-3), vs. Florida State (3-3) vs. Syracuse (4-2) at Yankee Stadium, and at USC (4-2). If the Irish win-out, there’s a strong chance they’ll be one of the four teams selected to the College Football Playoff.

“There’s a number of things we’ll talk about internally about the next challenges in front of us,” Kelly said. “I think, more importantly, our football team is excited about the upcoming weeks in front of them. We just have to keep them channeled and go one day at a time.”

This article is written by Austin Hough from Goshen News, Ind. and was legally licensed via the Tribune Content Agency through the NewsCred publisher network. Please direct all licensing questions to legal@newscred.com.