No. 13 Memphis vs. No. 19 Tennessee: Time, TV channel, prediction, preview

There’s a healthy rivalry brewing in the state of Tennessee between the Volunteers and Tigers’ men’s basketball programs after Tennessee won on Memphis’ home floor last season and the two sides exchanged pleasantries near the end of the game. Saturday brings Memphis-Tennessee Part II and this time, Memphis is the higher-ranked team.

Tennessee will host Memphis on Saturday, December 14 at 3 p.m. ET.

TRENDS: Parity at No. 1 and the new 3-point line have dominated early season college basketball trends

ESPN will broadcast the game between Tennessee and Memphis. You can stream the game on WatchESPN.

Last year amid Tennessee’s 23-1 start to the season, the Volunteers went to FedEx Forum and defeated Memphis 102-92 on the Tigers’ home floor. Now Memphis will have the opportunity to win on Tennessee’s home floor.

Tennessee (7-1) is a three-point loss to Florida State on a neutral floor away from being undefeated, while Memphis (8-1) has only lost to Oregon in Portland. While the Volunteers boasted the No. 3 offense in the country last season, they’ve become more defensively oriented this season. They’re No. 16 in adjusted defensive efficiency and they’ve held three of their eight opponents to less than 50 points and all of them to less than 70.

Meanwhile, Memphis is the least experienced team in the country, according to kenpom.com, but the Tigers’ youth movement has led to a top-25 ranking and wins over Ole Miss and N.C. State.

Saturday will arguably be the biggest test of the season for freshmen Precious Achiuwa (13.9 ppg, 9.4 rpg) and D.J. Jeffries (12 ppg, 4.4 rpg) and the rest of the Tigers as Tennessee represents Memphis’ toughest road game to date this season.

The question for Memphis will be: Can the Tigers establish their pace of play against the Volunteers, whose average offensive possession is more than three seconds longer than Memphis? The Tigers have the 10th-fastest tempo nationally and when their athletes are flying around, they grab lots of offense rebounds (a 34.8 percent offensive rebounding percentage) and get fouled (Memphis attempts roughly 4.5 free throws for every 10 field goal attempts), while the Volunteers will try to slow down the pace of play, relatively.

CAN’T MISS: The 2020 bracket projected, about 100 days from Selection Sunday

Here’s the complete breakdown of conference championships week in the 2019 college football season, filled with games that have a maximum impact on the final College Football Playoff rankings. 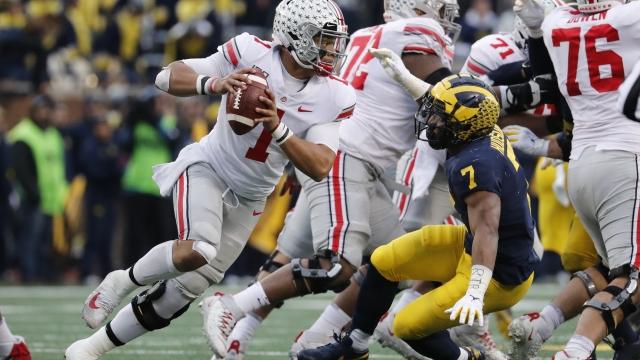 The top four in the College Football Playoff rankings remained the same heading into conference championship week, with Ohio State, LSU, Clemson and Georgia ranking first through fourth, in order.

LSU, Ohio State, Clemson and Georgia remained in the top four of the AP Top 25 college football poll this week, while Alabama and Minnesota fell several spots after losses.